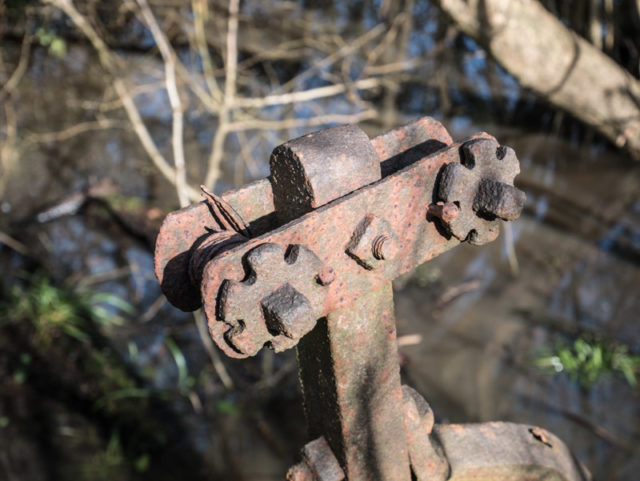 A strange mixture, but all in the correct order.

Last full day down south and my how the time has flown. All the things we were going to do and all the places we were going to see. Well we did do some of them and we did see some of them too. Today we were going to take Hazy to the garden centre, the same one Canute and Delia had taken us to, so I knew the route. We had some time to waste first, so I left Scamp to guard the house while I went for a walk in Horton Park.

Like I’ve said earlier, is a well kept park. Lots of little pathways going everywhere. Cycle tracks with obstacles to jump or ride over. Confusing signage which seems to point out five different ways to get to the same place, all in different directions and with different distances, and parrots! Well, actually they are parakeets, green ones that screech their way across the treetops, never coming close to the ground. Found lots of interesting little nicknacks all over the place. Rusted fenceposts that must have been pre-WW1. Little clearings in the woods and more parrots. I’d only been given an hour at most to investigate the woods, less than that once I’d navigated my way round a roundabout. Soon my phone was warning me that I’d used up half my time and it was now time to return to the house.

Managed to drive out the driveway and on to the road without hitting anything. For some reason the traffic was kind to me and allowed me a space to exit on to what is usually a very busy road. Followed the road Canute had taken and quickly found the garden centre without having to cross the standing water that had dogged his journey. Pizza in the garden centre is usually a must, but today it must have been the apprentice chef who was in charge, because when my buzzer announced its arrival from the oven, what I took charge of was a bit thin and scorched. I ate most of it. Scamp’s baked potato looked no better. Bought a few things then wheeled Hazy to the car and found out how to fold the wheelchair neatly into the boot. That’s when the trouble started.

We had to reverse out of the parking space, but every time I though I’d selected reverse, the car moved forward. I checked the gearstick to see if I had to lift the stick to select reverse, or push down on it, but neither of those was available, it was simply a case of push left, then forward … except that didn’t seem to work. Hazy even phoned Neil in Goa to find out if there was a magic word you had to use first, but he just confused me even more by saying that you moved the stick left, but kind of left and back, and then forward. If it had just been Scamp and I in the car I’d have started swearing then. If I had I’d have missed the sight of a beautiful bird, a Red Kite flying up out of a field across the road. I was half watching it the the stick slipped neatly into reverse and we were off again on our way. I was careful not to do anything stupid that necessitated reverse gear again until we arrived home and the passengers were safely in the house. Then I did the unforgivable. I read the manual. It said to use a dynamic movement to select reverse. More a curve left and forward, rather than two discrete movements. It worked like a treat. Now I saw what Neil had been describing. However, after I’d managed to get the car into the position it was in before we left, I got out, locked the door and walked away. I don’t think we’ll bother looking for a Mini as our next car.

PoD is one of the old pre-WW1 fenceposts. 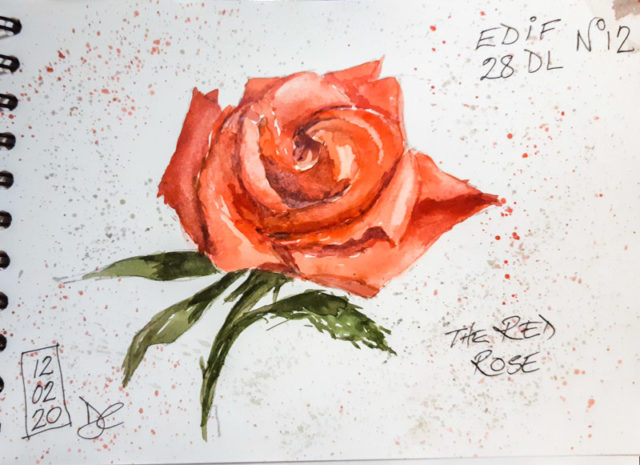 SoD is a rose, using what I remembered from the technique I learned from an old man on a cruise a couple of years ago.

Spent the evening packing everything into two roll along cases one bag and a rucksack. Tomorrow we’re off home.