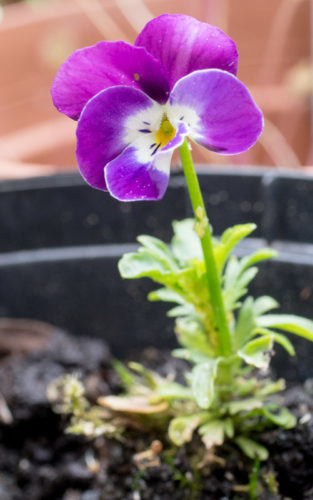 We went to visit Torwood Garden Centre today as Scamp had found a small square in the garden that would support one more plant.

A fairly early rise for me to go and post a parcel, then get some blood taken for my annual health check next week. Checked with the hospital about my prostate appointment and found that I’d been mistaken about the time and it was actually well in hand. More bloods needed to be taken for that too! Heavens I’ll be like a pin cushion this month!

After lunch we drove to Falkirk to the garden centre. Actually I wanted some peas for the raised bed as my previous two plantings have been growing downwards instead of up or something, because they weren’t showing their little green heads. Not in the raised bed where two lots were planted and not in the pots in the greenhouse where two lots were planted. Got some today. Not a named variety, just labelled Garden Peas. Scamp bought a big green plant with spotted leaves. Looks the part and will bring some colour to a dull part of the garden that gets little or no sun.

When we came home, she unveiled her plans for a long raised bed to be used as an edge to the front garden. It’s to run from the corner of the house out to the path. That’s a distance of about 4.5m and about “That wide” she indicated with two hands. I’m actually more used to working with numbers. It makes it much easier when you’re buying lengths of timber and also when you’re cutting them to size. I’ve found in the past that “That wide” can vary considerably with the length of a person’s arms. We may do some measuring and some drawing tomorrow.

Today’s PoD was the wee 2cm viola which is flowering in a plant pot. Tiny wee thing. 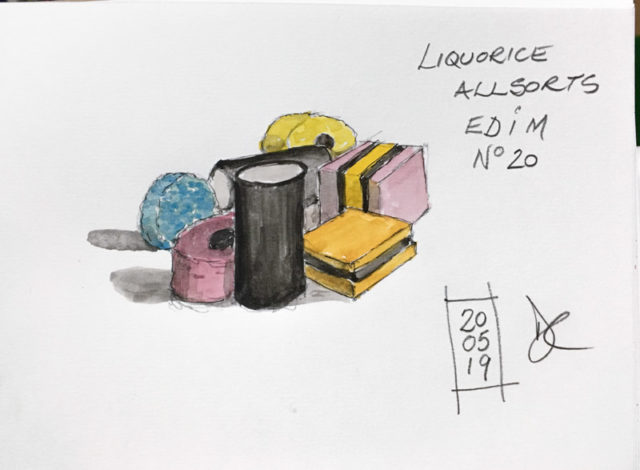 Today’s sketch took ages and I’m still not happy with it. Topic was Some Sweets and I chose liquorice allsorts. It took about four tries before I got something resembling them. No time left to do anything else, so it had to do. Onward and upward.

Went dancing in the STUC and the new moves for the advanced class were “Spiral” and “Osco”. Both were interesting and both were doable with care. Beginners class were doing La Completa.

It was a day of ticking things off as we got them done. A good day.

Tomorrow we are both hoping to get our plants into the ground.