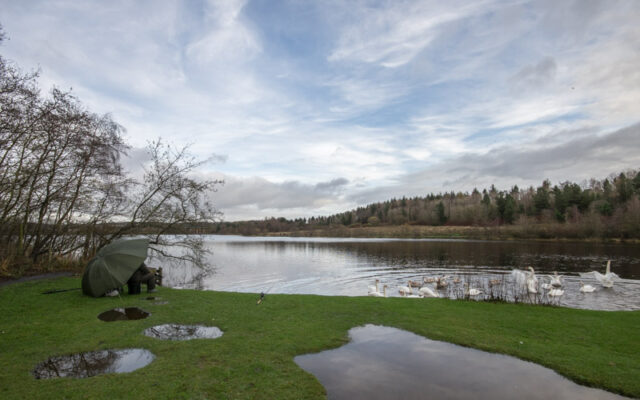 You have to be quick to get a walk in the dry bits.

We sat watching the rain pelt down and then dry up again. Both of us ready to go, but neither of us wanting to say to the other that it looked dry. Eventually we went for a walk down and round Broadwood Loch. Although I took the kit lens on the camera, I really wanted to try out the old Sigma ultra-wide 10 – 20mm lens with the new adapter. It worked almost perfectly. It focused, it recorded the aperture and shutter speed and I could change them. The only problem I discovered later when I was processing them in LR.

For the most part it was a pleasant walk. Thermometer said 7.4ºc and in when we were in the windy parts of the walk it certainly felt like that. In the shelter of the trees it was a lot warmer. Today’s PoD was taken with the new camera and the old glass. The images were a bit dark, but I can forgive that for the quality of the finished product.

The problem with the adapter is that it makes a blind stab at the maker of the lens. The focal range too is wildly wrong. It’s a pain to change, but I’m sure I can come up with a fix. The main thing is I don’t have to rely on manual focusing which is difficult to remember to do when you’re used to having the camera do it for you. Best of all, I get to keep my good old Nikon glass and use it easily.

We just managed to get back to the house before the rain came on. Just as we were passing the shops we could feel a drizzle, but it didn’t really pelt down until we were safely inside. Of course I had to try out the Hive while we were out by setting a 30min ‘boost’ in temperature to warm the house for us getting back. Just showing off really.

Spoke to JIC tonight and he explained in a rational way how the vaccine works without the hyperbole that the news people seem to want to attach to it. So now we know that those freezers that are needed to keep the vaccine at -80ºc are not as uncommon as (again) the news broadcasts tell us.

I think my NAS drive is dead. I wasted about three hours on it today and apart from one time it appeared to work, the rest of the time it was just an ornament. I think it’s had one kick in the head too many! 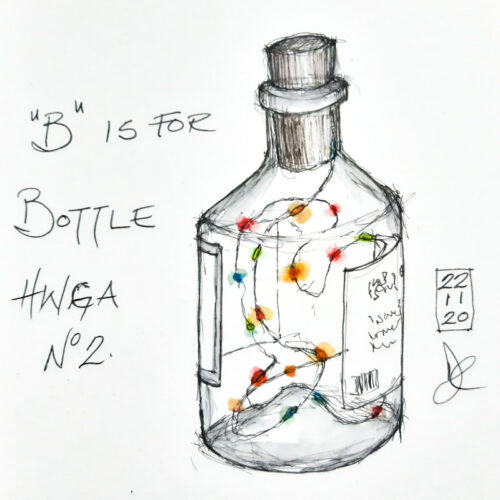 Today’s sketch is “B” for bottle. Just an old empty gin bottle that, like the NAS drive is just an ornament. We did drink some Harris Gin and it was very nice.

Tomorrow we’re taking Shona to collect paint form B&Q, six tins of it. Other than that, nothing planned.