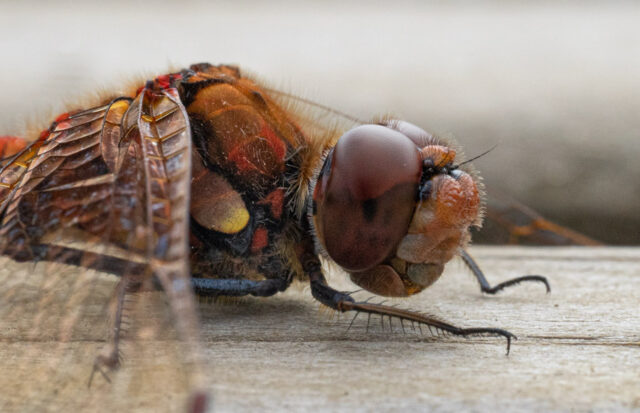 The day after the dance was over.

I thought I’d be aching a lot more than I was today. However, an extra half hour in bed and a relaxing day wouldn’t do any harm at all. With that in mind, the most strenuous thing I did in the morning was finish Friday’s sudoku. It’s strange that you can study these fascinating puzzles for hours on end without adding one number to the grid, then pick it up the next day and see all the clues you missed. It’s almost as if some good fairy comes in overnight and writes a few extra clues for you.

After lunch we had a wander round the garden, pruning this and dead heading that. We also discussed what was going to be moved and where it was going to as well as what was going to fill its space. It’s all sorted in Scamp’s head. She was just telling me about it. Sometimes, that’s what ‘discussion’ is.

I took the Big Dog and the Big Lens out for a walk in St Mo’s where I found two dragonflies, one male and one female who were perfectly happy to sit and be photographed. It was the male that made PoD, or more precisely, the head and thorax of the male dragonfly that made PoD. Interesting too was the shield bug carrying aloft a caterpillar like a trophy. Both are available on Flickr along with the delightful Troika rose.

Dinner had a bit of a cobbled together theme with half of yesterday’s Chicken Tikka Masala added to half a Vegetable Masala plus some cauliflower and served with rice. Actually it tasted really good, as did the Eve’s Pudding that was the dessert.

Spoke to Jamie later and heard about the trials of house buying. Once you’re past the initial excitement it’s all to do with money for this and more money for that. I don’t envy him this part of the game. Being Jamie, he played down his baking skills after making a Chocolate Swiss Roll.

We settled down to watch what turned out to be the shortest F1 GP in history. With only three laps completed under a safety car, in the torrential rain, Max Verstappen was declared the winner. I really felt bad for the fans who had paid to watch some racing and got to watch the rain falling.

Out fairly early again tomorrow to take the Blue car for its first service in Stirling. We may get the bus in to Stirling itself and go for a coffee.