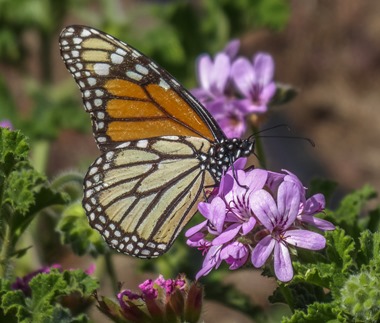 The task for today was to walk to the island for sangria.  Anything else was a bonus.

After breakfast, we sat by the pool for a while, but I was getting itchy feet and wanted to go for a walk.  The grounds of the hotel are fairly extensive and really well landscaped.  There’s  a stream running through it with fish in it.  There was a waterfall too which feeds the stream.  Along the banks of the stream there is a cat house and a fenced off area for the partly feral cats to live in.  I’m sure you’d be impressed Hazy.  That was where I headed today.  I was disappointed to hear that there was no rushing waterfall noise and that was because the waterfall wasn’t operating now.  The river is still there and the fish are enormous.  There are loads of cats too wandering around.  Some are quite dismissive of humans, as only cats can be, others are quite skittish.  This too will be quite normal for you Hazy.  Saw one of these large butterflies and managed to get a photo of it while it was feeding on some pelargonium flowers.  That is my PoD.

Wandered back to find Scamp and then we got ready and walked to the island.  It is actually an island, partly manmade I think and only accessible by a bridge.  A new bridge as it turned out.  Not more than a year old and made of good quality mahogany.  Most impressive.  We found a table and ordered a jug of sangria.  It was really quite good.  Not as good as the brandy based sangria Scamp had in Trinidad, but tastier than a  lot of red coloured water I’ve had in the past.  Lots of apple and orange bits floating in it too.  That’s when we saw the dolphins.  I’d seen some from the balcony last night, but all I really saw was the spray from their blowholes.  They were far too far away and my binoculars were no use because they were in a drawer in the back bedroom back home.  Difficult to access from that distance away.  These ones were much closer, but you could clearly see their fins and the spray when they breached.  I took a few photos and we agreed it was good to see them so close to the shore.  When I went to pay I saw one of the dolphins even closer to the island, only it appeared that there was a ball shaped object floating, now sinking, now floating again, just ahead of it.  Next time it surfaced I saw the pipe of the snorkel strapped to its head and then realised that ‘fin’ was in fact the diver’s flipper breaking the surface.  Oh dear, what a numpty.  Sangria must have been quite strong after all!

Walked back via the Spar shop in the Atlantico Centre and bought a tin of Pimento Dulce (Sweet pepper) for cooking with when we get home.  Yes, I know that I could have bought it in Tesco for about the same price, but when I use this pepper in a paella, I’ll remember the day we had sangria on the island at Caleta and saw the mysterious dolphin.

When we came back, it was time for lunch and today it was steak for me, cooked perfectly. Scamp had the vegetarian option.  After lunch Scamp and I went for a walk over the wilderness bit of the dunes.  There wasn’t much to see there, but it was good again to listen to the sea crashing in.

After dinner we went to wait for the singer and sax player we’d heard the last time we were here.  Unfortunately she couldn’t start until some football game was finished.  Bad planning by the hotel authorities.  Also, the germans (Small ‘g’  –  you know what that mean) had taken over all the seating and wouldn’t let anyone sit near them.  Now maybe we’ve just met some rude germans, but every time we come into contact with them, they are rude and overbearing.  Eventually we found a seat far away from the guttural shouting they call language.  Heavens, they didn’t win the first world war and they didn’t win the second word war,  They weren’t even placed!  What right do they have to be so noisy and proud of themselves?  Like I say, maybe we’ve just been unlucky.

When the music started, it was the typical middle-of-the-road stuff I hate.  Music for people who don’t like music.  However, Scamp coaxed me up to shuffle around the floor to something totally forgettable.  When we were leaving the floor she asked the singer if she could play some salsa.  Yes, she would.  She made an announcement that a couple wanted to do a salsa dance and she would play El Carnaval.  It was fast, really quite fast, but we knew it and gave it everything we had.  Not quite a perfect dance, but a good demonstration.  It certainly shut up the slimy guy who seemed to think he was John Travolta.  We got a great clap for that, then it was back to german junk and vanilla pop.  Got to keep the germans happy.  Look what happened the last twice they got upset.  We did try out our emerging Jive steps to an old Neil Diamond track and that was the end of the night.

Tomorrow we are hoping to go for a walk to the harbour.  Maybe get some food and drink on the way.