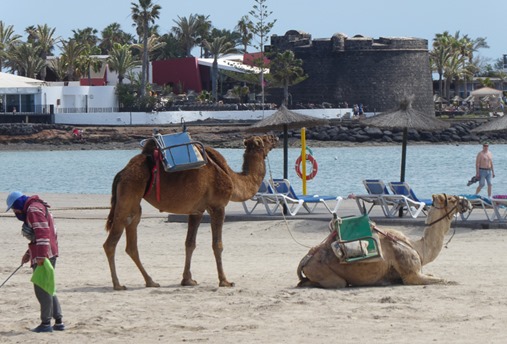 Today we were going in to town, Caleta de Fuste.  Not driving or bussing, just walking.

Lighter breakfast than of late.  Omelette chef is amazing.  Tossing an omelette like it was a pancake.  Never seen that done before, but will try it when we get home.  It could get a bit messy, I suspect.

After breakfast we started the trek out along the new walkway with it’s wide pavement and cycle track that zig zags its way across the sand dunes to Caleta.  It didn’t take as long as I remember it, but there was new scenery along the way.  New apartment blocks had sprung up in nice bright colours.  New restaurants had replaced old supermarkets and finally they have torn down the fish restaurant and built a new one.  I hope they’ve also torn down the attitude that if your face doesn’t fit, you don’t get what you ordered, or at least that’s the way it seemed to us when we went there a few years ago.  We walked through the town.  Scamp got some money and we had a drink in The Trafalgar.  It’s an institution in Caleta.  It used to be run by an argumentative Londoner who was always getting in a fight with his neighbours.  He was full of stories and having a drink in there was an entertainment.  Today was much calmer.  We haven’t seen him for years.  Don’t know if he went back to England like he kept threatening to do or if one of those arguments boiled over into something more sinister.  Who knows.  Scamp wanted to go there because she remembered you got a mug of coffee.  I just wanted a pint of lager and I knew you got British beer on tap, so both of us were happy.

We walked back for lunch and stopped to photograph the camels.  There have always been two camels on Caleta beach.  I think I’ve only once seen people paying for a ride on them.  Don’t know how he makes any money.  Today he seemed to spend most of his time picking up camel crap.  What a wonderful job.

After lunch Scamp was going sun bathing and I was going for a walk along the sea shore away from the town.  It’s a bit rough, with lots of sand dune areas and boulders by the sea, but if you can find a place away from the wind, it’s great to just sit there and listen to the waves crashing.  Got a few photos, but nothing startling.  On the way back I got a painting done, more of a sketch really of the little restaurant on the island off the beach.  You get to it by crossing a bridge.  We may go there for sangria tomorrow.

Back at the hotel we met up again and I went for a swim.  Scamp had already been to the pool.  Unfortunately the water was getting cold by the time I was ready for my dip, colder than yesterday I think.  That said, I did a few crossings of the pool before I came out.

Dinner was Canarian tonight, although no little yellow singing birds were in evidence.  What was there was roast leg of goat and it was really, and I mean REALLY lovely.  Like a cross between beef and pork.  Not the tough, stringy meat you’d imagine goat to be.  If I see it on a menu again I’ll definitely try it.

Entertainment tonight was Bombay Dreams.  Not the curry shop unfortunately, but a Bollywood dance quartet.  Three girls and one very camp guy gyrating and hip wiggling across the stage.  About a quarter of an hour into it, I started looking for paint that had started drying.  It was that interesting.  Unluckily for me it went on for another half an hour with wailing vocals and drum ‘n’ bass rhythm and absolutely no content.  Dire, and not a Rogan Josh in sight.

PoD?  Oh, it must be the camels.  Or as the bloke who wanders around behind them, picking up their dung, describes them.  Shits of the Desert!

Tomorrow?  Perhaps, like I said, a jug of sangria between us on the island.