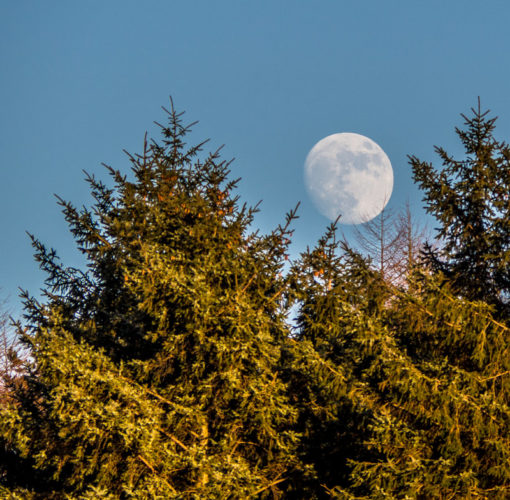 Well, the day started out well with bright sunshine, but it soon deteriorated into the norm. Grey skies. Later in the afternoon it cleared up nicely.

For weeks now I’ve been meaning to put the Christmas decorations up into the loft. Today I did it. Unfortunately, I made two discoveries.

Right, one problem solve and another created. We’ll need to get someone to look at the roof, specifically the ridge tiles, because that’s where the water I coming in, probably at the joints. With all the wild weather we’ve been having, I bet the roofers will be busy just now.

Went for a walk down the Luggie today to take my mind of giant spiders and leaking roofs. Got a couple of nice pictures of the moonrise above the pines. The bit thing just now is the Blue Blood Supermoon due to be seen across America on Wednesday night. A Blue moon is when there are two full moons in a month
A Blood moon is something to do with an lunar eclipse when the moon is at its nearest point.
So what I saw wasn’t a supermoon, it was a semi-supermoon! Still looked good.

Salsa tonight was a house full in both classes. Monkey has been re-worked again and emasculated even more until it’s no fun to dance at all. The new one from last week has been forgotten by the looks of things and we reprised La Cuadra but Jamie couldn’t remember the ending. A tiring night and not a very successful one. Maybe it was just me.

Tomorrow I think we may go in to Glasgow for a wander.