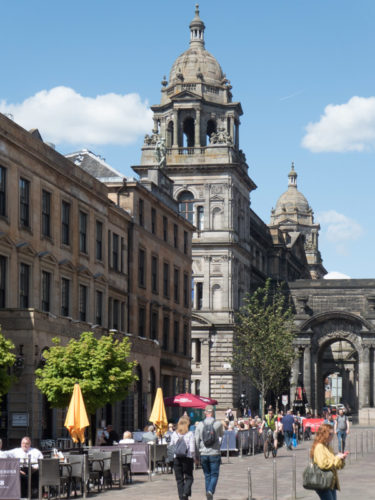 We didn’t have much planned today, other than to get some compost and do some more work in the garden.  It would have been a shame to anything else with another beautiful day.

To that end, we went for a trip to B&Q in the morning to get some cheap grow bags. Half the ’grey hairs’ in Cumbersheugh were there today with their Diamond Cards, looking for their 10% discount, and they’d all been raiding the cheap grow bag section. As a result there was only one left. A poor little torn at the corner item with some of its peat leaking out. I took pity on it and humphed it into my trolley. Scamp wanted some ‘Busy Lizzies’ for her planter beside the back door. She picked some that looked as if they might last until the weekend at least. The same couldn’t be said for a lot of the plant in B&Q. Lots of them were dehydrated and even more looked as if they were past reviving. However, she was happy with her choice and with her care and attention, I’m sure they’ll be flowering soon. Back home we got to use our IKEA porter’s trolley to cart the bag of peat from the car to the raised bed where it will provide some much needed nutrient.

By the time we got back there was just enough time to have a bite to eat before we left for Glasgow and our ballroom / jive torture. We didn’t do too badly with the ballroom, but the jive was a bit of a ’disaaaaster darling’. I can handle the footwork in the waltz and the footwork in the jive, but trying to fit in the footwork with the arms in jive is too much for my little single core processor to handle. I really need a brain transplant, hopefully a quad core one to manage the psychomotor skills needed for this dancing caper. I was really thankful when the lessons came to an end. It was great to walk back through Glasgow under a blue sky with office workers walking about in their shirt sleeves. Glasgow under a blue sky became PoD.

Back home there was the temptation to go over to St Mo’s for another photo or two, but I only had an hour and that isn’t long enough to do it justice, so I left Scamp to her planting while I prepared my drawing materials for taking to college tonight for the portraiture class. I have to say I was a bit apprehensive about the class. How good would these artist be? I know how good Fred is, but would the others be even better? I needn’t have worried. I’m about the middle of the class. Not as good or as confident as Fred and not as basic as some. I’ve a lot to learn. It’s just a small class just now, only five of us, but hopefully it will get bigger. First week done. Homework for next week. A self portrait or a head and shoulders of a member of your family. I suppose that will be Scamp! Oh yes, as a bonus the teacher, Roseanne, plays some interesting music.

Tomorrow the car goes under the knife at Halfords to fit the dash cam. Hopefully Scamp’s taking us out for the afternoon while the operation continues.