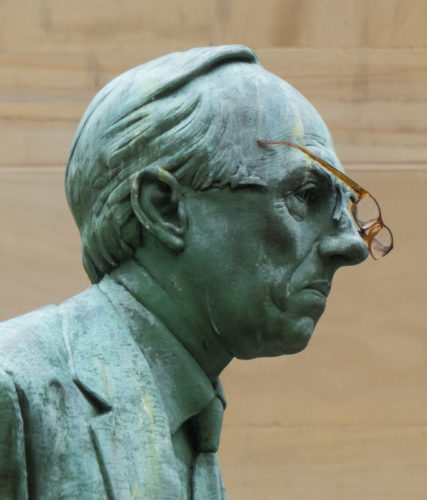 Today dawned with lots and lots to do. Best get started.

First thing to do was to design and cut the mat (frame) for the little piggy painting I did on the cruise this June. It was an instant hit with Scamp, which is a good start, and it always brings a smile to my face, even on ‘black monkey days’. Ok, maybe not a full smile, but at least a tweak to the corners of my mouth. It deserved a decent frame. Frame cutting needs accurate measurement and an ability to subtract and divide. Photoshop is also a good tool to use to try out your finished calculations and see what the finished article will look like. By lunchtime, the little piggy was in his new home. Also the tractor was securely garaged in his and lastly, I’d found another landscape photo in portrait format and in monochrome if that’s not an oxymoron! Three submissions for Colin tomorrow.

A ‘piece ’n’ bacon’ and I was ready to face the shearers. Scamp drove me to the train station and I was quickly whisked away by the silent power of electricity into the bomb site that is Queen Street Station. Nothing says ‘Welcome to Scotland’ like a half demolished station with no coffee shop, no magazine shops, in fact no shops. Just a hundred sheets of dirty polythene hanging from the rafters. It’s a disaster. Walked over to West Nile Street and had my hair cut by the non-speaker barber. He may not speak, but he finished his No3 on the sides and No4 on top in double quick time and he made a very good job of it too. Sometimes it’s nice to just sit there and watch the hair falling off and ponder the fact that every time I go there my hair gets more and more sparse.

Paid for the cut and itched my way back to Bucky Street via Sausage Roll Street where I grabbed a few shots of what was Scamp’s favourite Chinese restaurant in Glasgow, now just a gaping hole between the buildings on each side. It’s been scraped down to basement level by the demolition crews after the fire in March. It’s a strange thing to see in the centre of Glasgow, but I don’t expect it will stay a vacant lot for long.

Along at Bucky Street I saw and shot my PoD. Poor Donald Dewar’s statue has a hard time with its specs. This time some kind soul had given him a new pair. Possibly he what thinking “Should have gone to Specsavers”.

Dinner tonight was a piece of Smoked Haddock with Cheese Sauce, served with Potatoes and Spinach. Home grown potatoes of course.

Tomorrow is dancing in the afternoon and then we’re going to hand in our competition entries to Colin, all being well.