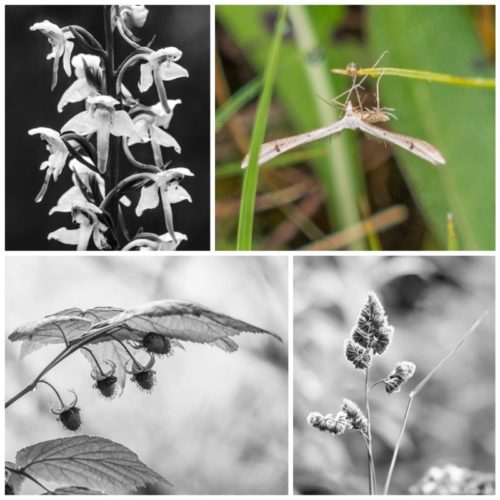 Woke at 6am and couldn’t get back to sleep. I decided that as it was a lovely looking day, I shouldn’t waste it lying in bed, so I got up and dressed and drove down to Auchinstarry and walked out along the railway. Although the birds were singing in the trees, I couldn’t see a single one and there were no deer or other animals to be seen either. What there were, were hundreds of slugs and snails, probably encouraged out after the overnight rain. Although I quite like snails, slugs not as much, I didn’t want to spend my walk photographing them. Instead, I took some photos of the leaves and plants that were shaking off the rain. In the process, I got soaking wet, but that’s inevitable as soon as you leave the path. By the time I got back it was just after 9am and time for breakfast and the sun was still shining. That was so much better than lying in bed thinking I should be doing something more creative. Scamp was just getting up when I got in and breakfast was beckoning.

Skipping forward to lunchtime, I took myself off to the pool for a swim. No gym yet, I’m not ready for the full exercise regime just yet. On the way, I stopped in at Jim Dickson to get two new front tyres to be ready for the drive down south later in the month. £100 lighter, I went to the pool and had a relaxing sauna, swim and steam bath. Then I intended nipping in to B&Q to get a price for some gravel to edge the grass at the back garden, then going to see what was wrong with the air-con in the car. It was supposed to be a quick visit, but then I bumped into an old colleague Mae Campbell (no relation). We spent nearly an hour standing taking about folk we used to know and schools and stuff. That put paid to my visit to Bonnybridge to check the air-con. Oh well, maybe tomorrow.

Flickr seemed to be working better tonight and when I uploaded the photos, the first one that appeared was the mono shot of the grass flower. That made me think of a Lush shower gel I used to get called, oddly enough, ‘Grass’! They had stopped making it, but I was told in the shop to check the ‘Kitchen’ area on-line as Lush occasionally made up small batches of some discontinued lines. Lo and behold, this week there was a short production line of … Grass!  Ordered on the spot.

No great fakery today with the photos, not anything like yesterday’s forgery. Only cropping, a bit of tonal adjustment and then, for some, a reduction to black and white.

Don’t know if I’m doing an early shift tomorrow. It depends on my sleep pattern.