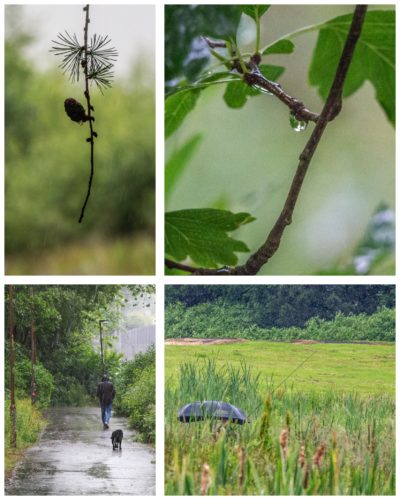 Wet from start to finish today, but stuck to my guns and went out in the rain to capture something of the essence of the day. There were quite a lot of people about given the weather conditions. I felt sorry for the poor wee man sitting fishing under his umbrella. I hope he caught something – not the cold though! My cold has lifted thank goodness. Scamp is still coughing, but I think she is on the mend now.

It would be nice to say that these were all as they came out of the camera, but as usual, some ‘shopping’ was necessary.
The man with the dog for example:
When I got the base photo, the dog was off investigating an interesting scent in the woods, so I had to wait until it surfaced again, but then the man was facing me and had lost his hunched shoulders pose that really summed up the rainy day. No problem, I cut out the dog and added it to the original base photo, then blended it in with a vector mask. Although I knew it was raining heavily at the time, the photo didn’t show it, so I added some rain as a layer and changed the layer type to Lighten and it looked so much better. If you can’t see those carefully crafted raindrops, check out the version on Flickr 😉  EDIT!  Well, you will when Flickr remembers how to upload files.  What’s the point of having all these bells and whistles when the basic system doesn’t work.  For Flickr read Fuckr.

Had coffee with Val in the middle of the day and enjoyed the chat. It’s always good to see old friends you haven’t met with for a long time. Had a long discussion about computers and programs. Picked up a few tips on new apps to try, both on the PC and on the Mac.

Dinner was a bit rushed as I decided at the last minute to go to salsa after all and with Scamp’s blessing. I knew that Jamie Gal wouldn’t be hosting tonight’s session, and was hoping it wasn’t Colin but dreading it might be Shannon although there is one worse than that. Surely she wouldn’t inflict him on an advanced class. Keep him for the beginners. It turned out to be Will who taught a good class very clear instruction and a great deal of humour. Total enjoyment for the full hour, 9/10 Will.

Driving home, I thought I might attempt Charing Cross Mansions as a sketching objective some time. One of the prettier architectural frontages of Glasgow. I would need a dry day for that, and the weather forecast doesn’t seem to include one of those for the foreseeable future.