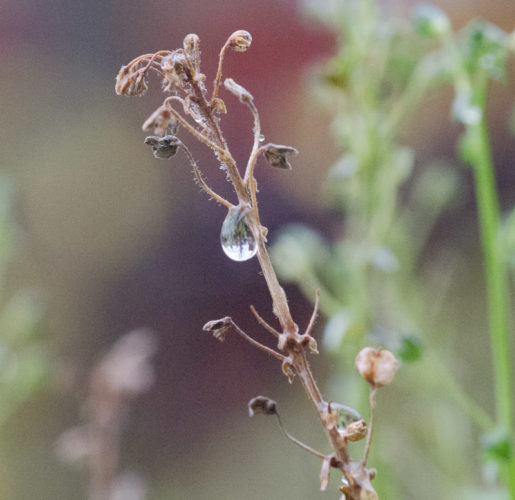 It was a cold start this morning for some, but not for me. I turned over and went back to sleep.

Had to get up eventually after Scamp went off to meet her niece. Did a bit of painting, but eventually had to admit that it wasn’t working and heaved it in the bin. That’s when I noticed it was snowing outside. Luckily it was falling on to wet ground and didn’t lie, but it showed the intent of the weather to land us in the white stuff soon. According to the weather folk, it will be worse tomorrow. If it is cold in the morning, I’ll get up early and go out and get some photos. That said from a nice warm, centrally heated livingroom. It might be different in the cold light of early Saturday morning. I did get a photo or two and one of them is the PoD. As usual it’s not an entirely honest shot. The dried up flower stem was in focus in one shot and the water drop in another, so Photoshop provided the necessary magic to combine the two.

In the afternoon two blokes came to remove the two seater settee. They made the whole operation look so simple. No removing of doors. No removing of door handles. Just a lift and a turn and the bloody thing went out without a whimper. That same operation on the three seater took over half an hour and a lot of swearing.

Later I searched the internet for a bargain on photo printers, but, although there were offers galore, there were no actual printers to back them up. It was all ‘pay up front and collect next week from the store’. Eh, no, that’s not how it works mate. If you’ve not got the actual goods in the shop, then my money will be staying in my pocket. Once bitten (by Vodafone) twice shy.

So, it looks like snow tomorrow and there’s rugby on in Embra again, and I did check this time, the game starts at 2.30pm at Murrayfield, so the trains will be mobbed. Don’t know where we’ll go.