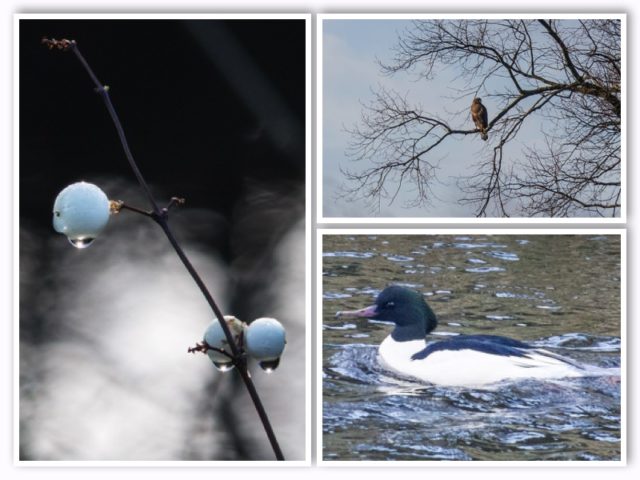 Busy day. Lots of baking and cooking and clearing up and laying tables, because Isobel was coming for dinner.

Since Isobel is , I had to ignore my usual bread recipe and make bread with gluten-free flour, lots of water, lots of oil and two egg whites. I’ve made the bread before and it turned out, much to my surprise, perfectly edible. Today, I was a bit more confident than I was last time, and possibly it’s true that familiarity breeds contempt. Made the dough, or more correctly, white slurry and poured it into a cake tin to rise. I reckoned I had an hour or so free, since Scamp would be out herding Gems into Abronhill for the afternoon, so I drove down to Auchinstarry to walk the canal, the plantation and the railway.

Walking along the canal I came across a flock? Crowd? I eventually settled on Gaggle of Goosanders, sailing merrily up and down the canal. Chasing one another and diving for fish. I don’t think I’ve seen so many. Too many to count and because they were crossing paths and almost crashing into one another, a pointless task to count them. I only see them on the canal in the winter. Do they overwinter here? Must check.

Dogs. Why are there so many dogs and doggy owners in the world? They all seemed to be congregating at Auchinstarry. It seemed that everywhere I looked there were dogs or folk looking for dogs. There was one exception, apart from me. One dog seemed to be following me and also seemed to be looking for an owner. My “Sorry mate. I’m not the owner you’re looking for” didn’t faze it at all. In fact it ran ahead of me and then waited until it was sure I was catching up before running on. Did it want me to follow it, or does that only happen in Lassie (or, if you’re Scottish, Black Bob)? But then it got distracted. A cyclist came down the path going in the opposite direction and it immediately chose him as its lost owner. The last I saw of it was the black blur tailing the cyclist for all it was worth, far down the path. I hope it got home safely.

Crossed into the plantation and came upon a woman delightedly ‘training’ her Staffie to ‘SIT’ and ‘STAY’. I don’t know who was having the most fun, the dog or her. A few bends later I noticed the buzzard sitting majestically in a tree and grabbed a few shots, before being investigated by what looked like two Dobermans with half their legs cut off. Maybe they were miniature Dobermans OR, as they both had sparkly rhinestone collars, maybe they were miniature Doberwomans. I’d have asked the owner what variety of dog they were, but she swept imperiously past without a word. Thankfully the rest of the walk was dog-free as was the trip to Tesco afterwards.

Got home to find that the bread had risen quite well, too well in fact and was oozing down the sides of the cake tin and over the worktop. Oops. Time to put the oven on I think. Spent the remainder of the afternoon making Pesto and Marinara sauce to cover the Italian Chicken. Thanks again Neil D’ for that recipe. The bread baked fine and was deemed a success by Isobel and Scamp. The chicken was partly successful as we hadn’t known that Isobel didn’t eat tomatoes, but she did manage to scrape the marinara off and all in all it was a good night. Lots of entertaining stories and just good conversation.

PoD was not the Goosander or the Buzzard, but the pretty white things growing over the canal. There’s no accounting for my taste!

Tomorrow I need to remove the door to the living room and the handles from the front door as the two seater is booked to make its exit to the charity shop. Seating will be at a premium then until Monday. Scamp has suggested that we utilize the sun loungers. It seems sensible because they were hardly ever used in the garden this summer!