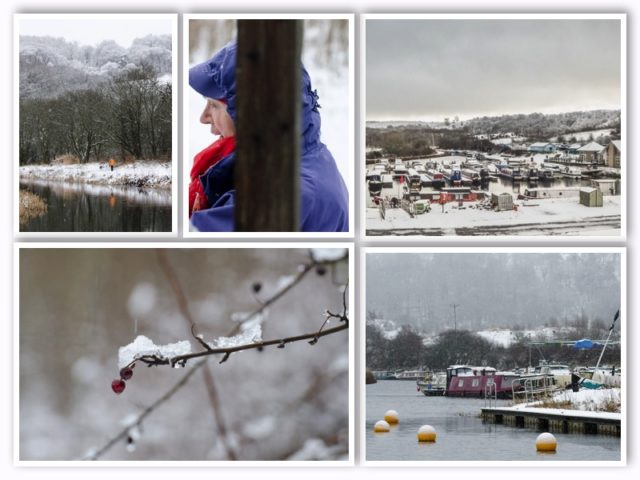 During the night, the snow fairy had visited us.

It was deep, not very crisp, but even when we woke. I went down to drag enough snow off the car, to let me drive it up to our parking area, yes, I know that’s not exactly legal, but needs must. Once it was near the house I could get it uncovered properly with brushes and stuff. With the car cleared of snow we drove down to Auchinstarry to go for a morning walk. Just my usual walk, along the canal, over the plantation and back along the railway walk … in a blizzard part of the way, then in sunshine, then in another snow shower. It was a good walk. Probably the best bit was walking across the plantation on untrodden snow and making that crunching, almost squeaking sound that snow makes when it’s fresh.

Got a decent set of photos on the walk. Five of them are above. PoD was the one of the lady in the orange jacket walking along beside the canal. It was really nice of her to position herself there in exactly the right place. I also liked the pic of Scamp unconsciously posing behind the wooden gate.

That’s the snow dealt with. Next the snowballs. I was making Butternut Squash Soup for dinner tonight so we went to Lidl to get some Butternut Squash and it was there Scamp saw the snowballs. Snowballs for the uninitiated are two hemispheres of sponge joined into a sphere with jam or icing, covered in thin icing and rolled in desiccated coconut. Correctly made they are delicious. These ones were correctly made!

I had to forego my snowball until after I’d been to the dentist this afternoon, but it tasted all the better for that. The dentist Chair of Torture was broken, so the condemned had to climb on a small stool to get on to it! Still, it was a “No fillings today mum” kind of day, so I didn’t care.

It has snowed on and off all day and as Scamp was heading for bed she reported that the snow was on again. It’s good not having to care about it or going to work in it!