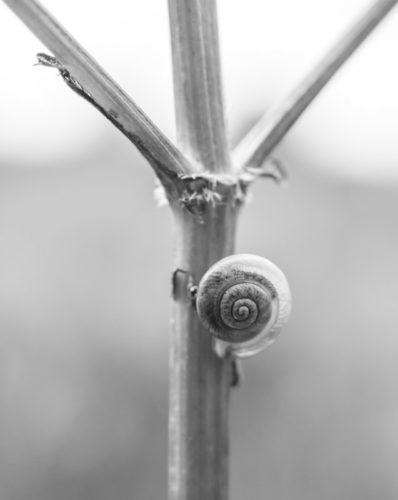 We’d plans to go for a bracing walk somewhere nice, but the weather had other plans.

Really, what can you do with these weather fairies? They tell you it’s going to be windy, cold, but dry. What happens? Well, we get the ‘windy’, we get the ‘cold’, but in place of the ‘dry’, it rains, on and off all day. They have a great suite of weather tracking computers, but really all they do is stick their hand out the window and that gives them their prediction for the day. It wasn’t really as bad as that, but it was quite bad. The sun shone for a short while in between the showers and then, later on, just before sunset, the sun shone, when it was far too late to go out for a bracing walk anywhere.

We did manage a wee run to the new shops for some essential provisions. Basically bread, fruit and fish. Later in the afternoon I managed to get an hour almost dry down the Luggie Water, but no butterflies were flying, no hover flies were hovering and only one solitary bee was buzzing. My PoD was a snail, snailing away up a cow parsley stem. Not much, but the best of a bad lot.

On the way back I thought I’d drop in at M&S for a wee bottle of Rosé and some chicken for a snack tonight or tomorrow. Also bought a pot of Basil that I would promptly cut into four pieces when I got home and plant each piece in a pot that will hopefully provide four basil plants in due course. Since I had so little in my basket I thought I’d use the self-service tills. Big mistake. First question from the girl in charge was “Cash or Card?” I said “Cash”. That got the reply “You’ll need to wait.” Nobody was at the till nearest to me, so I asked if I could use that one. “It’s broke.” was the answer. “What about the one at the corner?” although I knew what was coming. “Broke”. I gave up at this point and went to one of the Card Only tills, which wasn’t ‘Broke’, and finally got my three items paid for and as I was leaving the woman at the till next to me was trying desperately to grab the girl’s attention. Presumably her till was also ‘Broke’. Opened on Tuesday to great fanfare. By Friday almost half the ‘Cash or Card’ self-service checkouts were out of order. That’s not good.

Tomorrow we have a plan, but just incase the weather fairies are listening, or reading this blog, I’m not revealing it just yet.