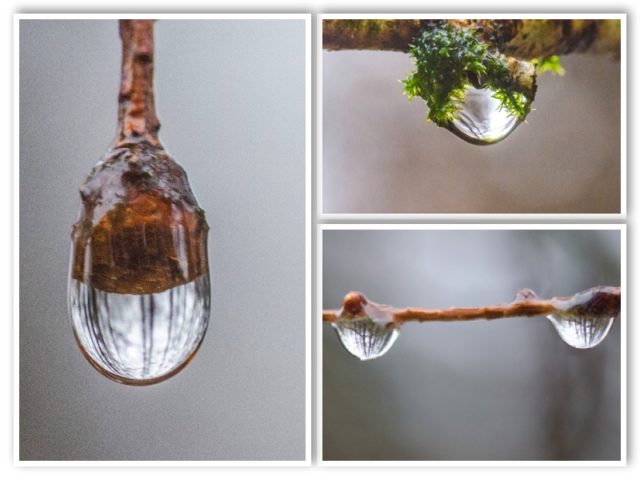 We didn’t actually have Storm Doris, we just had the snow that she was dragging with her.  Woke to a winter wonderland.  Lovely white snow everywhere.  Unfortunately Fred and Val and I were supposed to be going for coffee this afternoon, but when Fred sent me a text at about 10am, I knew it was bad news.  He couldn’t get out of his estate and as there is no bus service there, we agreed to postpone.  I phoned Val to tell him the bad news, I don’t think he was all that impressed, but if there’s one thing that retirement is good for, it’s not having to go out when you don’t feel like it, and we didn’t feel like it.

Sat around for a while watching the snow quickly turn to slush. Put the cases up in the loft.  Defrosted a couple of loaves and set them to rise.  Had the rest of the soup for lunch.  Walked over to Condorrat and then back through St Mo’s but found little to photograph, eventually settling on water droplets on the trees.

It was a bit of a wasted day, really.  Finally settled on snow as a subject for today’s sketch.  Even that took two attempts and by that time the snow was almost gone, but a bit of a watercolour wash rescued the few pen lines I used and made it look decent enough.

Bread looks as if it’s baked well.  Made one loaf into rolls and they look and smell a bit like Jaime’s Hop Bread.

Tomorrow we will, hopefully, go out.  Somewhere.  Anywhere.