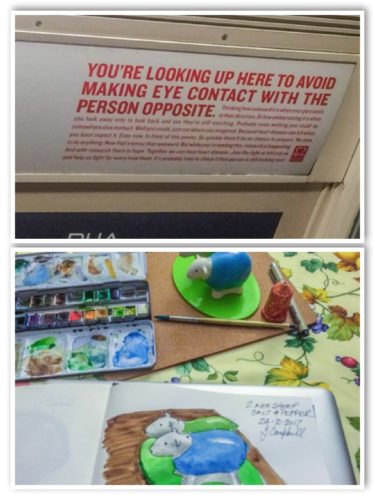 We made a late decision to go to Glasgow today.  The other option was Falkirk, but the finger finally fell (alliteration of ‘F’) on Glasgow because we wanted to buy some ‘Trinny’ stuff to make dinner on Sunday, and we didn’t think Morrison’s would have plantain, dasheen or cassava, but Solly’s African Shop in the West End probably did.  Or two out of three as it turned out.

Got the bus in because that meant we could both have a drink with our lunch.  I wanted some water based markers in Cass Art or Millers so we headed down Buchanan Street, then along Argyle Street.  Scamp suggested we should have lunch in Charcoal’s cafe on Argyle Street and I thought that was a good choice.  However, when we got there, it looked closed and although there was a sign outside, there was no lights on inside and no customers.  I was ready to head back to Paesano pizza shop when Scamp said why didn’t we try the Russian place, Cossachok.  I’ll admit that I wasn’t all that keen.  The a la carte menu didn’t look very inspiring, but it was open and it was busy and we’d often passed it and said we must try it.  Yes, we had to give it a chance.  I had Borscht which I’d heard of, but never tasted and for a main I had Golubtzi which was cabbage roll stuffed with mince served in a spicy tomato sauce.  Scamp had Olivie which was like vegetable salad which we both remembered having back in the ‘60s! Her main was Mama’s Blinis which was minced chicken in a thin pancake, served with a creamy spinach sauce.  I’d have borscht again, definitely, but the golubtzi was really quite hot.  Scamp didn’t like the spinach sauce because it had a caramel taste.  That said, the lunch was cheap, filling and tasty.  What else can you ask for.  Next time I’ll have Russian coffee which is espresso with vodka and whipped cream.  A strange mixture.  There will be a next time!

Got the subway out to Kelvinbridge and investigated two Caribbean food shops.  Both had most of our ingredients, but only one had the plantain we were looking for.  Neither had dasheen.  We came home with plantain, coconut and cassava. It looks like Sunday dinner will be Stewed Chicken with Fried Plantain and the possibility of Coconut Ice Cream.  Subway back and coffee before we got the bus home.  Only the advert above as a possible PoD.  I thought it was exactly what you do on the subway and exactly what I was doing.  I was avoiding catching the eye of the three Chinese (?), Japanese (?), Korean (?), yes, Korean girls sitting opposite.  They looked like three little maids from school (yes, I know that’s Japanese) and seemed to find the adverts funny too!  Good advert, well worded.

sketch which is here.  I wanted something simple to draw and paint and the two sheep worked well for that.  I needed something to recreate the mottled finish on the salt & peppers and decided to try out the salt technique where you sprinkle salt on a wet wash and allow it to dry before dusting it off.  According to the books, it works with sand too, but I’d never tried either.  I did a quick test using salt from my mum’s old bakelite salt cellar and the result was exactly what I wanted.  The photo shows the tools I used for the painting including the salt cellar.  Remember it anyone?

Yesterday’s snow and this morning’s ice is nearly all gone now, so I think we’re going down to visit Dorothy tomorrow.  Strong winds forecast for overnight, but hopefully they should have calmed down by tomorrow.