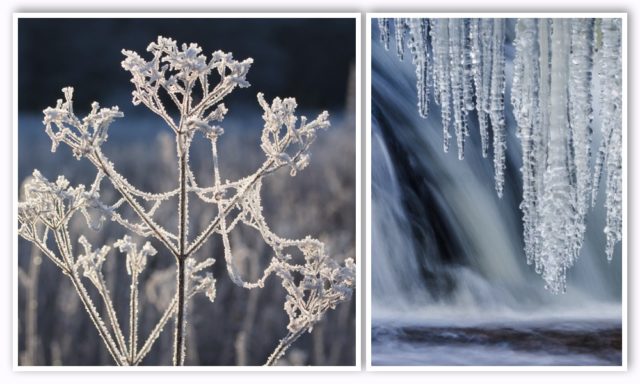 We woke to a temperature of -6ºc which was cold, but no snow and some areas of the country were much harder hit than us.

After lunch I went out to get a mouse trap, because something has been eating its way into the bag with the birds peanuts and I don’t think there are any birds in the house. On the way back I parked at the station and went for a walk along the Luggie Water. Not much actual water, but a lot of ice. Got some nice shots of icicles hanging in front of the wee falls upstream a bit from my usual walk. That made PoD. There wasn’t much else to shoot, although I’m always tempted by the contre-jour shots of hoar frost on the weeds.

We were dining out in La Rambla in Paisley before the salsa. Food was good, but the service was just too slow. The waiters never seem to know where food is going and it becomes a bit of a free for all. Dancing was organized by Shannon and it was very enjoyable. Just like last week, I danced almost non-stop for about two hours. Good fun.

The heater in the car is quite excellent and tonight, coming home it was actually too warm and I had to turn it down. Pity we don’t have heated front seats and heated steering wheels though. That would be the ultimate luxury! 😉

Early bed tonight, because we’re up and out early tomorrow morning and since it’s -6.9ºc just now, I think I’ll be scraping the car in the morning.