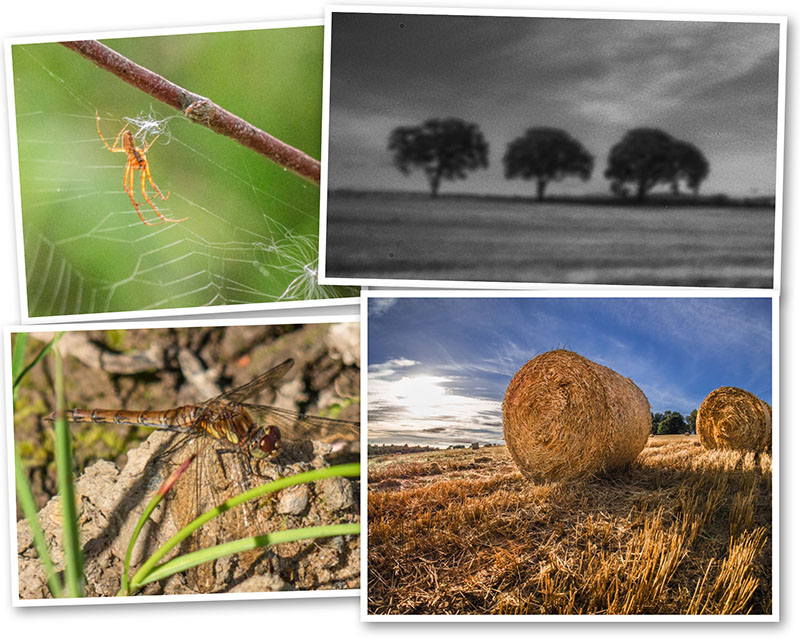 Wandering around my own favourite wilderness and noticing the skies are empty of swallows. If it takes more than one swallow to make a summer, does a lack of them mean the end? I think it does. Then I spot a dragon. Is that the contradiction?We had intended going to Embra today, but it looked like being a nice day and I didn’t want to spend the day in a train or wandering around the shops. Too good a day for that and if the first paragraph is correct, we should make the most of the good days now. The upshot was that as usual, Scamp was in the garden and I did a wee bit of painting and grubbing around in WordPress without any great success in either. Eventually, I decided that the weather was settled enough for shorts and tee shirt cycling and went out to get some photos and also some brambles if there were any left.There were brambles a-plenty and I got just over 600g which is not too bad. Just over a pound in old money, or is that me mixing my metaphors or something? The sun was warm and although there were no swallows, there was a dragon later in the afternoon. I got some photos, but knew that if I went closer, my shadow would encroach on the insect and it would fly away. Dragonflies seem to be very sensitive to changes in light, or maybe they just don’t want anyone stealing their sun. I also grabbed a few shots of spiders, sorry arachnophobes, look away now. It’s the transparency of the body that I like about spiders, especially contré jour. I just had to experiment a bit more with the pinhole effect and got a shot of the Three Amigos with the camera sitting on a fencepost. The last shot was as I was coming home and the light was warming up. It took me some time to find the best VP for the shot of the hay bales, but I’m happy with this one. There was a fair bit of post-processing done to get it just the way I wanted it, balancing the light and dark areas of the photo without falsifying it too much.Came home and dinner was courtesy of Bombay Dreams. Great online ordering system and way too much for one meal. The rest for lunch on Sunday.Weather on the turn for Sunday with lots of widespread rain forecast.