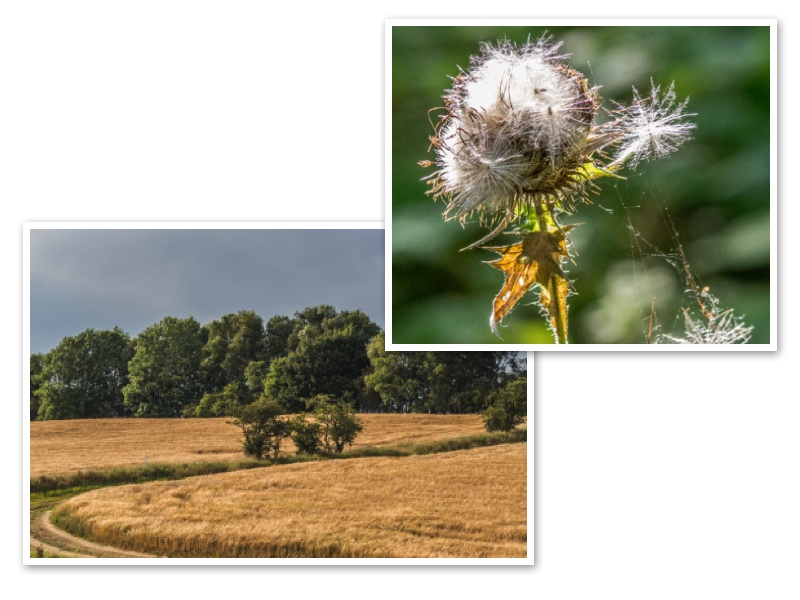 It looks from the weather forecast that it will rain later tonight, so this may be the last day of summer. Who can tell?

Day two of the new early rising regime and resolve is flagging already, but at least I didn’t stay in bed all morning. Scamp, on the other hand, was showing how it should be done and was up and working before I’d switched the shower on.

Went out in the afternoon, equipped with a tripod to get some more photos of the mini toadstools I’d seen on Friday, but when I got there, the toadstools were gone. There were some slug trails, but not enough to explain the complete decimation of the toadstool forest. I knew they had a short life-span, but I didn’t think it was that short. Disappointed, I looked for other photo opportunities, but none were to be found. It seemed too good a day to waste by going home early, so I went for a walk over the grassland of the dump, but there were no deer, not even a rabbit. The closest I got to a decent photo was on the way home when I took the shot of the corn field with the nice wee sinusoidal path. When I got home I found that I’d dropped my designer green glasses somewhere on the road or the paths. Must go back and find them soon.

Made some Tiger Bread today. Attempt 1 is not too successful. The actual bread is fine, but the Tiger part is too thick. More testing required.

Finally got photo galleries to work on my newly themed blog. This time they are totally within WordPress and not using the Galleria widget, thingy. It was proving just too clumsy and untrustworthy. To be honest, the basic ‘Classic’ theme worked fine except for the black background, but the paid-for ‘Twelve’ theme wouldn’t cooperate at all, so I used a much simpler WordPress plugin that did the trick for now. May revisit them later.

Beer with the Old Guys tomorrow. Usually a good laugh.