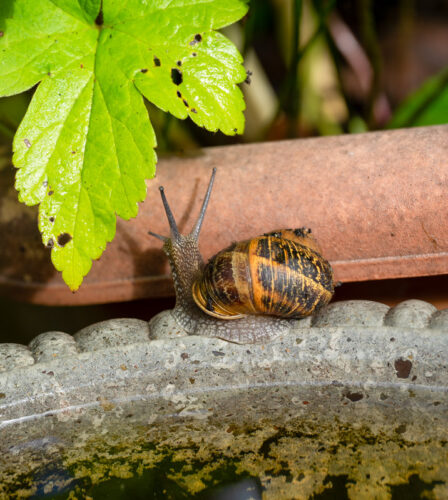 But a snail before the rain.

I noticed the snail when I was loading the dishwasher this morning and thought it might look good in a photo. I just grabbed the camera and went out to take its photo. I think it had been having a quick drink out of the birdbath in the garden and I managed to get a couple of shots before it attempted to slope off into the pot that holds the young gooseberry bush. Now most of this you can read in the description on Flickr, but you don’t get the unexpurgated version which is what I tell you here!

The true story is that I did grab a few shots of the snail with the Sony and a macro lens. Macro lenses give great detail, however they do tend to decide for themselves what bits should be sharp and which should be softer. That’s why I always take three of four shots. Then I can take the best bits of one photo and bolt them on to the best bits of another photo. Sometimes it looks a bit more Monsterpiece than Masterpiece, but with care (and Photoshop) it can work. This is a case in point. I took the head of the snail from one photo and carefully stitched it onto the shell from another. I can’t see the join and I know where it is! That photo got PoD. The second confession is that in the Flickr story the snail wandered off “to look for breakfast.” Much though we like to accommodate snails, we don’t want them chewing through our young plants, so I carefully lifted this one and dumped it in a patch of wilting bluebells under the old blackcurrant bush. Slugs get a different treatment. You don’t want to know where they go!

With at least one photo in the bag I drove off to Tesco to get a loaf and some other essentials. It was looking like a decent sort of day and I was thinking we might go for a drive. It was when I was coming back that I saw the heavy clouds. Soon after that the rain came and it got heavier and heavier and we could now see how these flash floods appear. There must have been gallons of water pouring down the footpath at the front of the house. After a fair while the rain slowed to just normal rain and the sky brightened, but no for long. Soon it clouded over again and there was a flash of lightning and almost instantly a loud peal of thunder. Then the rain started again, just as heavy as before. This time, although it got lighter, it didn’t stop and it rained all afternoon. I think it might still be raining now at 11pm. I’m really happy now that I got that photo of the thirsty snail this morning.
According to the weather fairies it’s to be a better day tomorrow, but just for a day.

Scamp was feeling better today and has gone to bed early to catch up on the sleep she lost these last two nights.

Hopefully the man from DPD will come to take away my Panasonic GX80 tomorrow and it will travel down to Brighton so the man at MPB can give it to some lucky girl or boy as long as they’ve been good and have given him lots of money. Some of that money, the man will give to us. That’s called The Economy!

Also, hopefully, tomorrow a man called John Lewis will have a shiny new black Sony A6000 for me to collect in the afternoon! One out and One in.