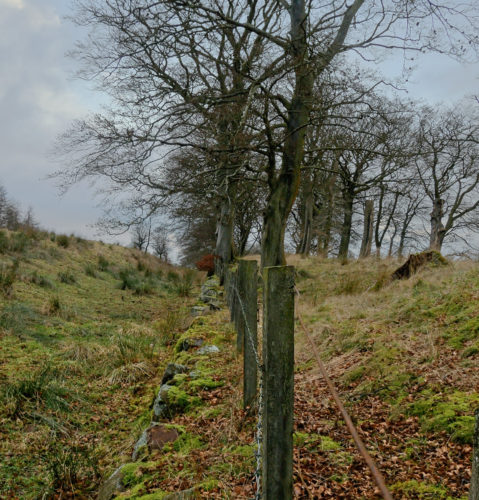 In the afternoon I climbed it and I photographed it. In the evening I hit it.

Gems were in today, as with all Mondays. I had some things to do, and thankfully I have a good pair of headphones, so I could drown out most things that bother me. They also worked on Gems. With the essential stuff done, I grabbed my camera and went for a run in the Juke.

For reasons best known to themselves, somebody has blocked the road to the Antonine Wall. It’s a dead end, but there is a neat little lay-by where I can leave the car while I walk the Antonine Wall. Now I’ve got to leave the car by the side of the road about 200m away. PITA. It’s still possible to walk round the obstruction, but not to drive past it. I wanted to get some photos from the Antonine Wall, but I’d the wrong footwear for the boggy ground, so I restricted myself to climbing part of it and using a fence post as a prop to support my Beadbag™ which would in turn steady The LBJ, which was today’s camera of choice. Got a few photos and one accidental post-focus video. Gave up after that because the light was rapidly disappearing.

Back home the accidental post-focus shot actually produced the best set of photos and that’s what created today’s PoD. It’s not perfect, but it gives an idea of the area and the wall.  This shot was taken from the south side of the wall.  The rampart on the north side is much higher to keep out the wild Picts and Scots. I needed a brighter day with better lighting for a better shot.

After dinner we went off again for another visit to the world of dance. Today’s topic was Waltz, but first, one of my most hated sequence dances, the Saunter Together. It really pains me to say that I felt quite comfortable dancing this little bit of fluff. That’s no’ real dancin’! Tonight’s moves were the first half. Next week we got part two. I can hardly wait 😒. Next was the Waltz and I did quite enjoy it. We very nearly got it right twice. That’s an improvement.

The second half of the night was Tango. We’ve attempted it a couple of times with no success. Tonight it was awful. I felt just so far out of my depth. All those fiddly little steps with kicks and flicks thrown in for good measure. Halfway through the lesson I just hit the wall. Enough! I never want to dance another Tango in my life. I could happily have torn off the uncomfortable dance shoes, thrown the dummy out of the pram and gone home. Except, Scamp was enjoying the dance and really looked good dancing it with the teacher. Maybe if I ask her nicely, Scamp that is, she’ll guide me in the general direction of competence. Maybe I’ll master it in the week I have before the next lesson.

Finished off with the Blue Angel Rumba which I’m almost managing. It just takes a different mindset from Salsa. It’s all about the feet and the hands just float about. Salsa is all about the hands and the feet just keep you moving.

Tomorrow the weather looks cloudy and grey. No plans yet.