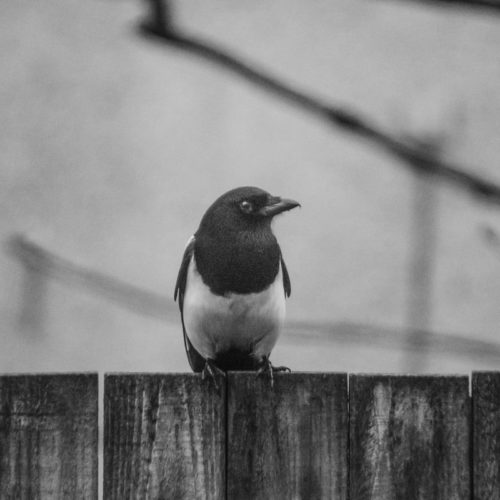 Woke up to white sky. No texture in the sky, just white.

Spoke to Hazy in the morning and she gave us a glowing review of Cyrano de Bergerac with James McAvoy, as well as what’s going on down London way. After that we thought we would go out for a spot of lunch. I suggested Oakwood Garden Centre, but Scamp veto’d that because she though it was too far on such a dull day. I agreed. She suggested the wee coffee shop at Clachan of Campsie. That was about half the distance and would suit the purpose of an hour or so out and the chance of a couple of photos. Sounded like a plan, and I decided to give the “big dog” i.e. the Nikon a treat and take it out for walkies.

First we drove to Kilsyth to try out the fish shop there. We’d hear it was worth visiting. It seemed like it, but we’ll be able to tell you better tomorrow once we’ve actually eaten the fish. Then it was on to Clachan of Campsie. Yes, JIC, the bike shop is still there, unfortunately the wee coffee shop was closed and it didn’t look as if it had been open for some time. Maybe it was just closed for the winter season, although it was often busy with walkers and cyclists all through the year. It didn’t matter the reason, we weren’t getting any coffee today! Worse still, the clouds were halfway down the hillside, so there was no chance of a photo down the valley from the Crow Road carpark. Double Bummer! Drove home.

Just to get us out for a walk, we went down to the shops for milk and of course came back with all sorts of things, like duck eggs, yoghurt and teacakes. The teacakes we toasted when we got home and that cheered us up. While I was waiting for them to brown, I spotted the starlings mobbing round the suet candle on the tree in the garden. Grabbed the Nikon and fixed on the 300mm lens. When I got back they had all gone. The culprit, a magpie, was sitting on the fence with a look that said “Who? Me?” I took his photo and liked it when it had been turned into a mono shot. That’s the PoD.

Dinner tonight was Chicken Curry. New recipe that I’ll edit and use again. Basically you chop up the chicken as usual and then add a half a tablespoon each of a selection of spices and a tablespoon of white wine vinegar. Mix it up with your hands, and fry the chicken then add half a tin of tomatoes, some chopped up chilli and some water, bring to the boil and then simmer for an hour. Serve with rice and for us, flatbread! Recipe here:

That’s it for today. Weather looks similar tomorrow, so we’ll have to wait and see how we feel about going out.