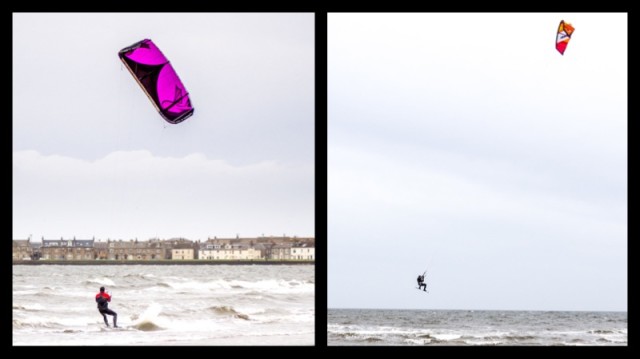 According to the weather reports and the weather apps, today was to be a good weather day.  They lied.

We drove down to Troon to get some fresh air, a walk along the beach and lunch.  The thermometer in the car read 5ºc when we arrived, but it lied too.  That didn’t take into account the windchill from a cold south wind blowing across the beach.  The kite surfers didn’t seem to mind, in fact they were revelling in the windy conditions.  We stood and watched them for quite a while after walking along a very untidy beach.  Loads of debris from the recent storms, Frank being the most likely suspect.  Apparently there were whole trees washed up on the south beach.

After walking back to the town we wandered round the vast selection of shops Troon has to offer.  It’s like so many of Scotland’s, in fact Britain’s towns these days and seems that the charity shops outnumber the full price shops.  Lunch was in the Lido which was very busy, most of the background noise being contributed by the girls at a ten year old’s birthday party.  Food was good, although my burger was thicker but with a smaller diameter than previously.  Scamp had Churrasco barbacued chicken skewers which looked delicious, but she said they were “Ok”.  She’s a tough critic, I know from experience.

After stopping on the way for provisions in Waitrose, we drove home.  After we stopped near the house, Scamp found a wallet on the road next to the car.  I suggested we hand it over to the police and let them deal with it, so we turned tail and drove up to the police station.  Felt better for doing that.  It was our good Samaritan deed of the day.  Hope the poor bloke got his wallet.

Picture on the right is not as it was taken.  The kite the bloke, I’m guessing it was a bloke, was using was a dark blue and grey and it was not quite in the frame, so I clipped a nice orange one from a diffent shot and replaced the dull one with it.  There, that looks much better!

Rain predicted for tomorrow.  What a surprise.