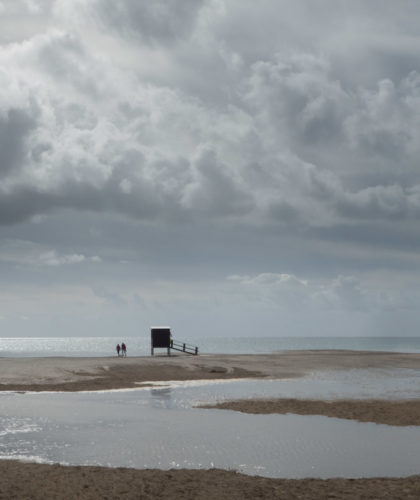 Out through the hotel gate getting the code right this time. Just in case you ever need it, it’s C2018Y and turn the handle anticlockwise! Then we walked left for a mile or so to watch the airies taking off or landing under cloudy skies.

It rained halfway there and we took shelter in a shopping arcade we’d never been in before. It was a bit ramshackle and had a pub called The Horseshoe Bar! Not the elegant Victorian edifice in Drury Street in Glasgow, although it might have been, we’ll never know because we didn’t go in as the rain shower was over. Saw an interesting shot of a lifeguard’s hut against a gloomy sky. It became PoD.

At the airies, Scamp heard one know-all telling anyone who’d listen that half of the planes were ‘aborting’ their takeoff. What they were doing was landing and using reverse thrust to slow down. Bampot!

It wasn’t a very interesting day at the end of the airport runway. There was a cooling breeze, there was the threat of more rain and the airies were taking off over our heads. It’s much more interesting when you see them coming in towards you from over the water. Or maybe that’s just me. Actually the rain didn’t come, but it was cloudy.

After lunch Scamp went to read by the pool. I took a walk over the lava rocks, but there was little to see apart from cactus plants.

Went to Lotto Dance at night. Didn’t win a star prize … or any prize. The idea was for the group to play some music to dance to. Anyone who got up to dance and lasted to the end of the song got a lotto ticket. At the end of the night, the winning lotto tickets were drawn and prizes were won. Good fun.