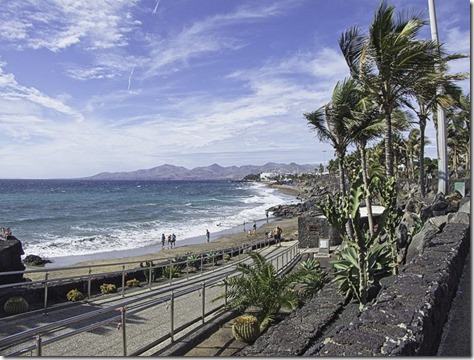 After breakfast we walked in to town.  The town in question today was Puerto del Carmen.

It was a fairly pleasant walk in to the town. Past the Crazy Golf course which used to have tumbleweed growing on it.  No tumbleweed today,  but still in disrepair.  No sign of it opening any year soon.

Further along the road we passed the chain link fence with the inevitable padlocks.  Hundreds of padlocks.  I’ve a theory it’s the shops that sell the padlocks who put up the chain link fences.  An even more efficient use of the padlock craze is to put steel bars along the back of the bench seating by the side of the road.  This also attracts hundreds of padlocks, but by the simple removal of a nut at the end of the bar, the padlocks can be slid into the sea at night, thus ensuring a never ending source of income for the sellers of the padlocks.  However, it’s only a matter of time before David Attenborough’s next nature program highlights the dangers to sealife caused by these rusting padlocks in our coastal waters. 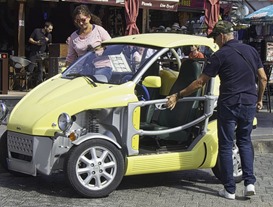 Saw this neat little beach buggy just leaving a pub on the front.  I thought at first it was a Smart Car, but now I’m not so sure.  Engine sounded like it was air cooled and maybe even a two stroke, but the radiator grille gives a lie to that theory.  A neat car, but I wonder how comfortable it would be in the snow and ice?  Maybe it’s never even seen snow and ice!

Yet further along on our walk we passed today’s objective, the Chinese restaurant.  THE best Kong Bao Chicken and Pineapple Chicken we’ve each had.  With the certainty that our lunch was going to be available we went and watched what appeared to be a Frisbee Football tournament with about ten pitches set out on the sandy beach.  Its proper name is Ultimate.  Who knew that such a thing existed?  We tried for a drink in a beachside cafe, but it appeared the service was really terrible and the wind was gusting along the beach, so we gave up.  Scamp got a new fan in a posh shop and then we went and enjoyed our chicken lunch, with Scamp’s Pineapple Chicken being served from a real pineapple and my Kong Bao served in a searingly hot platter.  While we were in the restaurant the wind started dragging some rain along the street, but although the sliding windows were partly open we didn’t get wet.

By the time we were leaving the restaurant, the rain was off and we walked back towards the hotel.  We did think of getting a taxi, but weren’t sure how long it would take as all the roads seem to be one-way, which makes navigating it difficult, and probably quicker to walk.  It rained a bit more on and off as we made our way back and by the time we got to the hotel it was beginning to rain properly.  We sat in the covered areas with the flame heaters on.

At night we watched the Hollywood Show which was quite well choreographed.  It was even better when you’d had a couple of whiskies on ice.  Later a couple were singing and playing keyboards.  We danced Salsa, Jive and even Bachata to anything they would play.

Tomorrow we may go out to watch the airies.