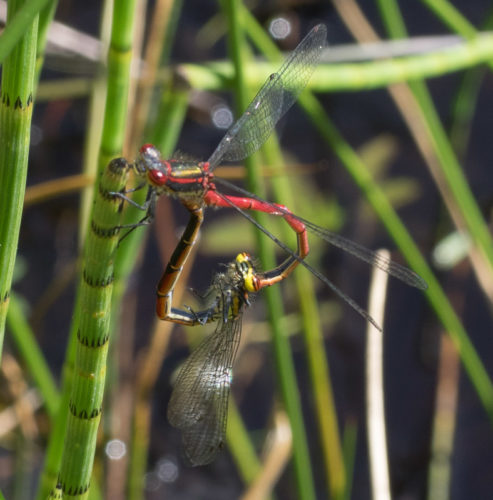 Another day when it was criminal to lie in bed.

So out we went again. Just a short walk this time and fairly local. Didn’t drive 30 miles just to check our eyesight as the ridiculous Dominic Cummings claimed he did. Does he really think we believe him? Does he really think our collective heads button up the back? I’m sure he’s right that Boris’s head does. Just a wee walk then. Got my first damselfly shots of this year and just as I was congratulating myself on the capture, I watched a blur of red as a damselfly appeared from stage left, grabbed a moth or maybe a fly that was sunning itself on a horse tail and scoffed it for its lunch. Amazing! It was all over in a couple of seconds.

Back home well in time for our own lunch (not a moth sandwich), then waited around the house for the Asda driver to discharge his load of groceries. With all the stuff safely stashed away, Scamp went out plastered in factor 50 to read in the sun and I took the ‘big dog’ out to see what we could see. And what we saw was one deer that saw me first and wasn’t ready for its close-up, so it made a sharp exit. Saw some tadpoles that have just the hint of frog legs appearing and also spotted Mr Grey studiously stalking something at the edge of the reed beds. Got a couple of grab shots of a pale coloured damselfly among the gorse bushes, but nothing really sharp.

Spent some time when I got back sketching out the shape of the panels of Lucy’s mask. Used Inkscape which is a free, open source vector graphics package that now runs cleanly on a Mac. Much more sophisticated than it used to be in its previous incarnation. Still more clunky than Corel, but it’s free and it works. A useful tool for the arsenal.

Today’s PoD is mating damselflies. Pretty standard, but the colours look more saturated than usual. That’s probably due to the strong sunshine they were taken in. Sketch of the day was ‘Keys’ and was just another attempt at rendering metal in ink and watercolour. Not nearly as good as yesterday’s, but still a worthwhile practise piece. 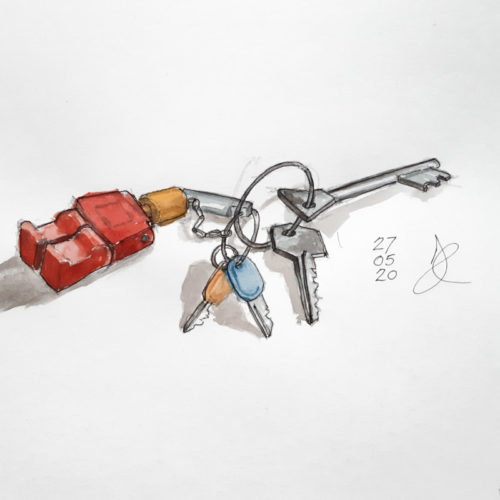 Tomorrow if the weather is good we may go out walking again. If it’s not I’m going to attempt a Lucy Mask.