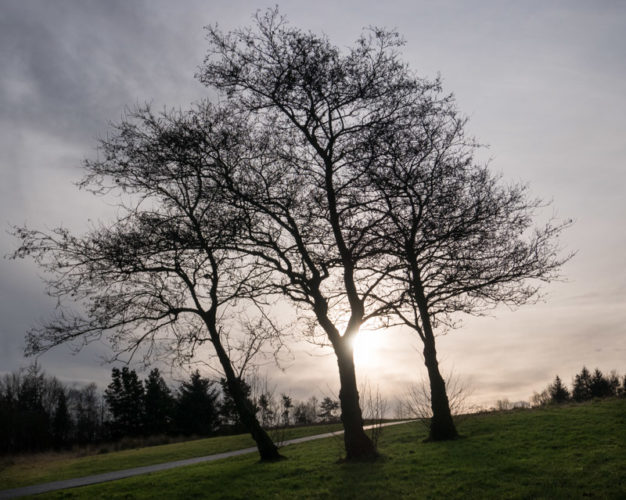 One of those days when nothing seemed to happen.

Scamp went out to Tesco in the morning for essentials of the season. Shortbread and wrapping paper and stuff. I went out to B&Q and got a planter for her spring flowering bulbs. While I was out I parked at St Mo’s and went for a quick walk around the loch. The lighting was decent, but nothing great, much like the day. The sun stayed low all day and seemed to be having a problem cutting through the light cloud, resulting in a low amber coloured light. PoD was a trio of trees in silhouette.

Spent about an hour trying to finance Scamp’s game playing with a Google Play gift card, only to find that I’d paid it into the wrong account. Why do they make it so difficult and complicated.

Drove Scamp through the traffic jam of busses and cars taking weans home early from St Mo’s school. Christmas holidays have started in earnest. Scamp was going to Jeanette’s for Afternoon Tea, not High Tea as I described it yesterday. My mistake. I decided to go the long way home partly to avoid the traffic jam round the school and partly to see if there was anything more interesting to photograph. There wasn’t.

Wrapped up some secret stuff while I wouldn’t be disturbed and frittered away some more time on-line. That’s when I noticed an offer from ON1 reducing the price of version 2020 by a tenner. That sounded like my kind of offer. I’d been hoping they’d reduce the price over Christmas and New Year, but wasn’t sure. Paid the money and am now the owner of Photo RAW 2020. Not the “Happy” owner, just the owner. Some of the rough edges of the software are still there. The supposedly non-destructive editing isn’t exactly as it says on the tin. Most things are, but unless I’m missing something, there are elements that are still destructive. It’s certainly faster than the 2019 version. Much fewer ‘spinning beachballs’ and if they stick to their previous plan of removing the rough edges as the year goes on, I’ll forgive them.

Scamp texted to say she was getting a lift home from Annette who, like me is finding her Juke is more thirsty recently than she’d been led to believe. I imagine the cold weather means the car needs to run on ‘choke’ for longer than in the summer. I think we should just do away with winter and have Spring, Summer and Autumn. Returning to Spring after that. I’ll suggest it to Boris and I’m sure he’ll consider it in his next manifesto.

Tomorrow we may go in to Glasgow, just for the fun of it!