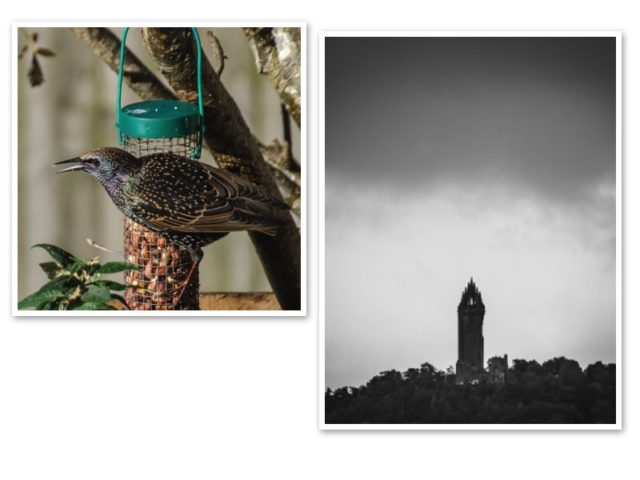 The day started with a bright sunny morning and we decided to go out somewhere interesting. No wandering around the shops and no long bus journeys.  Somewhere I might get some foties and a sketch done and where Scamp could get tea and a scone.

We settled on either Castle Campbell or Doune Castle.  Both would fit the specification, I thought.  As driver, I chose Doune.  We’d been there a few weeks ago and I like the building.

Unfortunately, the weather was deteriorating the nearer we got to Doune and there was a bit of drizzle in the wind when we got to the castle.  However, we were there and it looked like we were sharing the drizzle with the whole of the Forth valley, which meant that Castle Campbell would be suffering in the rain too. 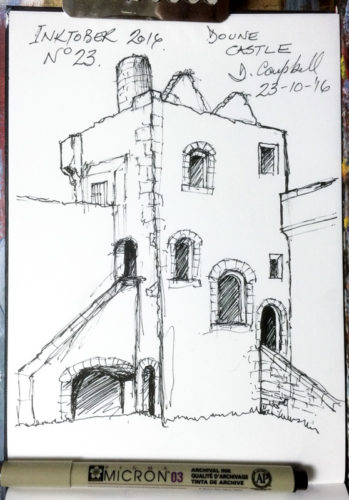 While I set up my sketching position in the corner of the courtyard to draw the entrance at the diagonally opposite corner, Scamp went for a walk through the inside of the castle.  My first attempt wasn’t all I’d hoped for, so I changed position and started again and that is what you see for today’s Inktober.  Perspective is a bit ropey in places and the proportions aren’t totally correct, but it was much better than the first attempt – you’ll have to take my word for it.

By the time I was finished, Scamp had returned from her investigation of the inner rooms of the castle and it was getting a bit cold.  That’s when I realised that Doune Castle didn’t have a tea room.  Bummer.  Not to worry, we settled on a quick trip to Dobbies at Stirling and coffee and a scone there.  As it happened, Dobbies was mobbed.  All the Sunday Drivers were there, ’Grey Hairs’ one and all.  “Do you want a meringue or a scone, oh look at the size of the sausage rolls, is that lemon drizzle cake, make up your mind, it that a jam doughnut … “  All without taking a breath.  Every one of them was the same and every one of them was in the queue in front of me.  However, I found the scones, loaded my tray.  Got the tea and coffee, paid and then found Scamps table while the Living Dead were still choosing which of the cakes they’d have.  They’re probably still there.

I’d grabbed a couple of ‘banker’ shots earlier in the morning.  Just photos of Stuckies (Starlings to you) squabbling over the peanuts hanging on the rowan tree outside the kitchen window.  I also got some shots of the Wallace Monument from Dobbies by poking the lens of my camera through the chainlink fence.  The tower had looked beautiful as we were driving down from Doune, but by the time we got the Dobbies, the light on the building had gone and the outlook was far more gloomy, almost sinister.  I still took the shot, thinking it would look good in mono.

That was it for the day.  More rain on the way home, so perhaps yesterday’s rain had come down the road from Perth after all.  Oh well, the morning had been good.

Tomorrow’s Monday.  The busy day.  My intention is to be better organized and get things done early.  We’ll see.