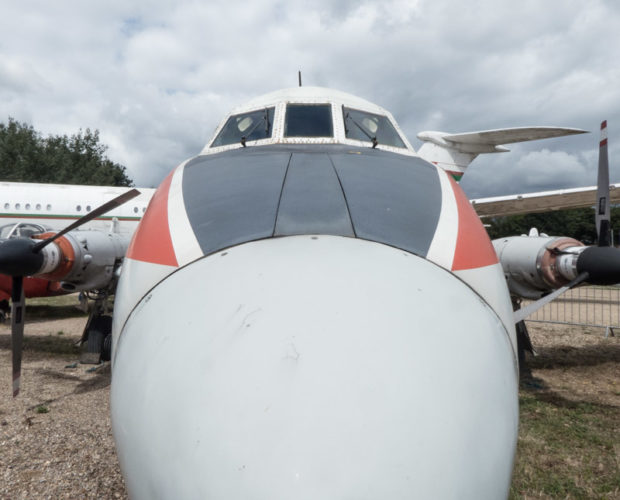 Today we went to Brooklands Museum to see the airies and the cars, but mostly the airies!

During breakfast Scamp and Neil settled on Brooklands Museum as the place to visit today. I’d heard of Brooklands, the first car racing track in the UK. I didn’t know then it was the first dedicated car racing track in the world. Eat your heart out America, we were first. Hazy was going to spend the day resting, so she would be feel refreshed enough to go out tonight.

The trip to the museum only took the half hour Neil predicted and it was a lovely day again with blue sky and just a smidgin of clouds. We drove past Mercedes World where some posh people were scooting round a racetrack in equally posh Mercs. They even had water sprinklers spraying a piece of the track to provide a skid pan. However, that wasn’t our destination, you just had to drive round it to get to the museum. After the brash flash of Mercedes World, Brooklands looks a bit downmarket, but that just disguises the history that it holds.

First up was the Malcolm Campbell Shed with the really old cars that raced on the Brooklands circuit, then through the motor and pedal cycles section to the Formula 1 area. After that Neil left us to go and read in the cafe and we visited the airies. Big airies. The Sultan of Oman’s beautifully kitted out VC10, the BAC 1-11, the Viscount and the Vanguard. All passenger planes, all part of my growing up. It would take too much time (and be boring for you) to name them all, but it was a trip through time. PoD was the view dead on the nose of a Jetstream.

At the back of the Aircraft Park is the banked section of the race track. I climbed up part of it, almost two thirds of it, until it became too steep. Then I realised that in section it wasn’t a circular curve, but a parabolic curve and became incredibly steep the further you went. It’s an amazing thing to see and to think that those old solid wheeled cars in the museum raced around this track. If you can’t visit this place, Google it and be amazed.

Lunch was steak pasty with chips and veg for the boys and baked potato with tuna for Scamp. Then after a look at the inside airies and another climb of the banked track we headed for home. It was clouding over a bit by then, but not cold.

Out at night to an Indian restaurant with Canute and Delia. Delia looking great after her recent op. Food was good, service was poor and conversation was the usual D’Aguiar tennis match of seeing who could give the cheekiest answer to cause the most hilarity to all concerned. A great night, marred slightly by the noisy, and I mean NOISY bunch at an adjoining table. Why must some people shout at each other all the time? Are they all deaf or just stupid? Easy question.

Anyway, a good day and evening too.