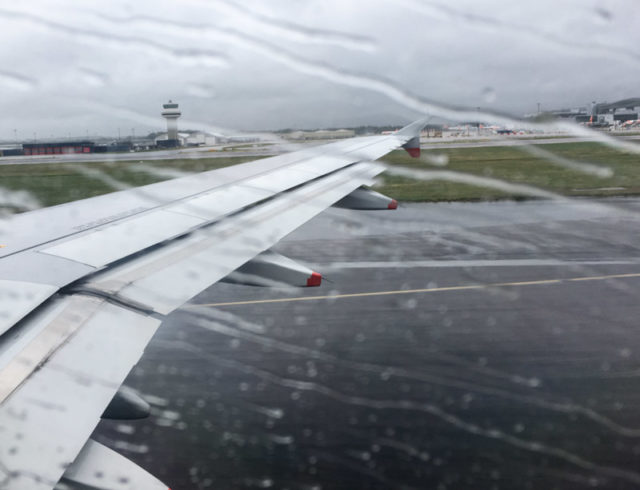 It was dry for a time this morning, but it didn’t last.

It rained, then it rained harder and harder. I’d have liked to have gone a walk this morning before we got on that big bird and flew north, but the rain prevented it. There’s a great walk round the golf course near Hazy and Neil’s that takes you through some lovely old hawthorn and beech trees. Apparently, if you’re really lucky you get to see some deer too, but not today. Too wet and if it’s been raining for some time, the trees just shake their leaves and you end up wetter than ever under them. We just stayed in and talked.

Hazy decided she’d join us on our trip to Gatwick which was good. I was amazed at the amount of surface water that had gathered on the roads when we were being driven to the airport. Water with white foam on top, whipped up by the cars’ tyres. I suppose it occurs mainly after a sustained dry spell. Anyway, I imagine it was quite unpleasant to drive through. Thankfully, that was Neil’s job today.

Arrived at the airport with plenty of time in hand and volunteered to put my wheely case in the hold for free and to free up some of the overhead locker space for those who were in a hurry, unlike us. Swiftly through security and into the waiting area. Had a vile cup of brown water and a lovely pizza from Jamie Oliver’s take-away, while Scamp and a latte and an ‘OK’ Portuguese custard tart from the same. I bought a painting magazine and we went through to the gate. Boarded quickly and efficiently, unlike the SqueezyJet like boarding procedure at Glasgow.

<Technospeak>
Reading my magazine, there were two articles dealing with the hues in blue paint. One claimed that Ultramarine Blue is warmer in hue than Cerulean and the following article completely refuted that! This from what is meant to be a fairly authoritarian magazine. Any blue which tends towards red must be a warm hue. Not my opinion this time, it’s basic colour theory. Absolute crap. Stiffly worded complaint ready to be emailed to the editor forthwith.
</Technospeak>

Waited our usual half hour at Glasgow for the bags to arrive, but at least that was better than the fifty minutes the message board was predicting.
The flight distance from London to Glasgow is approximately 345miles and takes about an hour.
The distance from the plane to the carousel is approximately 0.5miles and it takes about fifty minutes.
Bus in to Glasgow and then the X3 out to Cumbersheugh. I won’t go into the comparative distances and times, I’m sure you know my thoughts on that by now.

Watched an amazingly expensive (in terms of damage to cars) first five minutes of the Belgian GP. Thankfully everyone walked away unhurt. Then it just slid into the usual boring parade of cars. <Yawn>

PoD was the view of the rain streaking across the aircraft window as we left a wet London for a wet Glasgow!

I think it may still be raining, but it’s going to be drier tomorrow, so they say. We’ll see.