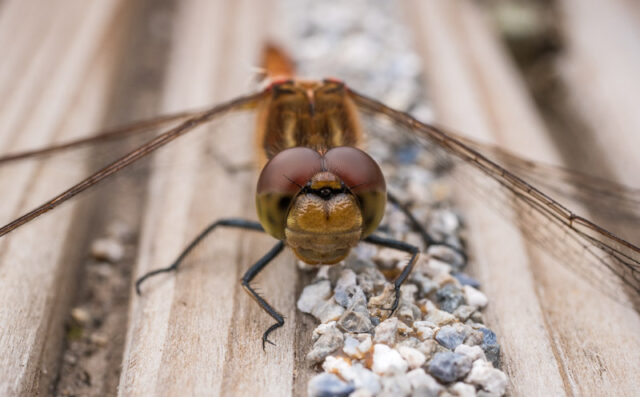 Grey sky, low cloud, thunderstorms anticipated. It didn’t look like a fun day and it lived up to that prediction.

Grabbed a shot of two crane flies on the Red Juke. Unfortunately the red colour of the car predominated and wouldn’t be calmed down with software, so the only solution was to turn it into a monochrome image which suited the graphic style of the shot. That was about all that was happening in the morning.

After lunch we waited around for a while hoping the sun would make an appearance and that the clouds would lift. Neither of those things occurred. Finally went out for a walk myself to St Mo’s. Found a very obliging dragonfly, a Common Darter. Maybe even the same one I photographed the other day. It certainly had the same demeanour. It seemed quite happy to be photographed close up. I’d brought the 30mm macro on a Panasonic camera and it needs to be really close to the subject to get the real macro effect. That mean the dragonfly’s head was about 30mm from the front element. It didn’t flinch. I reckon it knew there was nothing in that metal and glass thing that could hurt it and anyway, these creatures live their entire flying lives in a couple of weeks. The are running on fast-forward all the time. It would be off before I could have done anything aggressive, not that I would have. A Terrible Beauty indeed. The front view was a ‘given’ for the PoD. I also got a decent side view as an ‘almost PoD’.

There were a tribe of teenagers wandering home with their half empty bottles of MD (aka Mad Dog) after making the most of the last few days of their extended summer holidays. Some would have been affected by the crazy decision of the SQA to mark down the grades of some of them because they come from an historically poorly performing school. I don’t think John Swinney has actually apologised for the decision, but Nick the Chick has and I applaud her for it. Swinney should really resign now, before he is booted out.  “Robust and Rigorous” were his catchphrases back in his days as an architect of the poorly thought out Curriculum for Excrement. There was nothing Robust or Rigorous about changing the grades teachers had given pupils on the grounds of the school’s previous record.  ‘Teflon John’. Nothing sticks, until it does.

Picked some of our own peas tonight and used them in a Pea & Prawn Risotto. It was quite good, but would have been better if more of the peas were ripe. Hopefully we’ll get them later in the month.