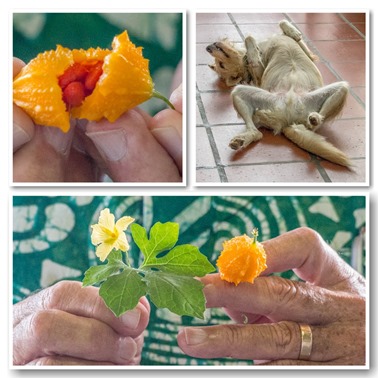 Today we said goodbye to Tobago and caught the plane to Trinidad.  Madeleine and Scamp weren’t very impressed with the pilot’s driving skills and I have to say it was a bit of a bumpy ride at times.  What I did wonder about was the fact that before it landed in Tobago, it hadn’t appeared on Flight 24 on my phone and there was no airline insignia on the fuselage.  A pirate of the skies perhaps?  Anyway it got us to Piarco airport on Trinidad and from there Madeleine drove us home, stopping on the way to pick up some Roti which are Indian flatbread wraps holding the main course which for three of us was chicken and for Scamp was veg.  Possibly my best favourite of these lunch wraps so far.

When we were at the airport on Tobago, Madeleine showed us the bright yellow fruit she’d picked from the hedgerow along with its delicate wee yellow flower.  I think it was a Carailie Vine, but I may be misspelling that.  I’ll check tomorrow.  It tasted good.  Just another of the fruits available on these islands.  Even better, this one is free as it grows wild in the hedgerows.

Ori was pleased to see us and after being fed, fussed over and having a run round the garden at top speed a couple of times, lay exhausted in the livingroom.  Such a relaxed dog.

While Madeleine was watering the garden earlier on, Jaime picked a Guava from one of the trees in the garden and we all had a piece.  Beautiful green colour with soft pink flesh inside.  They really do have an amazing selection of fruits here.  Unfortunately, one he was trying to harvest looks like it’s been invaded by ants.  It’s a Sour Sop.  It is a big dark green fruit covered in spikes and is supposed to have a sweet white flesh, but I doubt if we will taste it because the ants have been there first.

Today’s sketch is of a wee sea urchin shell that Scamp found yesterday on the beach at Pigeon Point.  It’s a bit rough, but at least it’s done and on time.  Maybe I’ll find something more interesting to draw tomorrow.  It won’t be the little beastie that Madeleine showed me today, asking what I thought it was.  I took a photo and it looked for all the world like a caddis fly larva, but it was much, much smaller.  I searched on Google for it giving as much info as I could and it turned out to be a Household Casebearer and it turns into a moth after pupating.  Nasty looking little thing.  Now gone along with it compatriots under a spray of bug killer.  Oh, yes, one more thing.  Out of the corner of my eye tonight I thought I saw a bright green light flying around the room, turning on and off.  Couldn’t quite catch it though, then I did and it was a Firefly!  First time I’ve seen one.  It looked like a wee moth with an LED on its bum!  And with that thought, I’ll say goodnight.