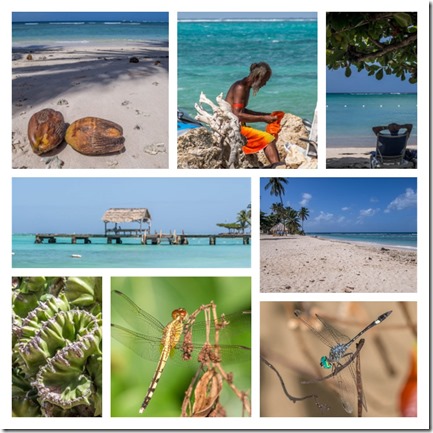 Out early again and got to Pigeon Point before the resort was fully open!  The benefit of getting there early is that you get your pick of the beach huts.  With our one selected and with sun screen slathered on, Scamp and I went for a walk in the shallows.  The water was cold, but then it was just after 9am.  The sea was much calmer today, so it was time to grab the mask and snorkel and head out to the reef.

Despite the lack of wind and only a slight swell, there was still a fair bit of silt in the water and visibility wasn’t that great.  However, 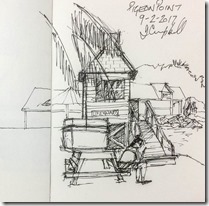 it was good to swim in the sea without getting hypothermia.  After a while I swam back to the shore and met Scamp who wanted to have a deeper paddle and test the improved buoyancy you get from sea water.  We just messed around in the fairly shallow water for a while and she did try a few strokes before we got out again.  Sat watching the colours in the sea and sky for a while then had an early lunch of biscuits and cheese, washed down with some fruit juice.  After that Scamp and I went for a walk along the beach and watched the pelicans diving for fish.  Scamp found a wee bit of coral to take back and then she found a sea urchin shell.  Walked back to the beach hut and did a quick sketch of the lifesaver’s hut.

Back at the beach hut, a hoard of americans arrived (lower case shows my respect for them).

The older ones were about our age and were quiet and quite biddable.  The younger ones were noisy and american.  What more can I say.  Each one seemed to want to project their inherent stupidity louder than the last.  Big Chief Stupid had his hair shaved at the sides and left long on top.  Such a good look.  I may grow my hair long this year and emulate him.  I won’t, however, plaster my arms and legs with ‘artistic’ tattoos.  To quote from Lou Reed “Stick a fork up their ass and turn them over, they’re done!”  Actually Lou was quoting from his friend, Donald, so maybe that’s a cyclic quote!?  We stayed a bit longer, I had another snorkelling mission then I went looking for a Sarong for Scamp, it being Thursday. Bought one from an old guy sitting on the beach with the sarongs hung up and drying in the breeze.  He even demonstrated the different ways to tie it.

Back at the apartment, I wanted to go out and get some pics of the pelicans fishing from the beach that had disappeared yesterday.  Today was better, but the waves were now attempting to cover it.  Walked along to where the pelicans were, and found a white bull in the field behind me  – no fence!  I said bye-bye to the bull and made a hasty retreat.  On the way back, I found a dragonfly, right next to me on a bush.  Dragonflies in February, now there’s a thing!  Got lots of photos.

Out to Karawak again for dinner.  Two waiters instead of waitresses tonight and it was Cajun Chicken for me and Mahi Mahi fish for the others.  I didn’t enjoy it as much as last night, but I was in the minority.

Back at the apartment, Jaime, Scamp and I went to watch the limbo dancer.  I think now we saw him the last time we were here, but he was entertaining with his fire eating and his clowning around.

We went to bed early because we’ll be up early tomorrow for the plane back to Trinidad.