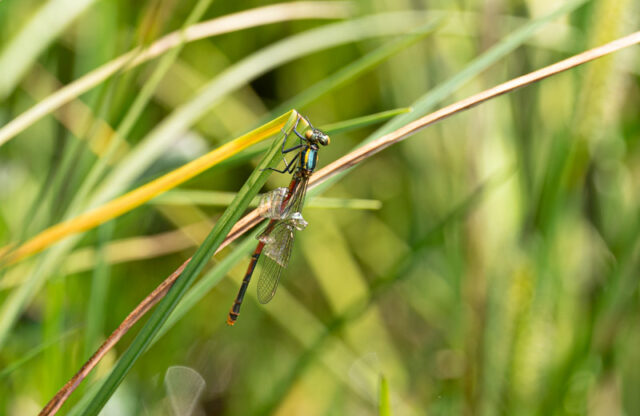 A day to enjoy the sunshine.

Today we didn’t go anywhere, we gave the car a rest day, we didn’t even have a dance class. What we did do was a bit of planting and rearranging in the garden. We also did a fair bit of sitting around, occasionally moving the seats to catch some more rays.

In the afternoon I took the Sony with the macro lens for a walk in St Mo’s and found a red damselfly fresh out of its exoskeleton, hanging on to a reed while unfurling its wings and pumping the blood into them before trying them out for the first time. It must have enjoyed the attention I was giving it, because its first flight ended with it hanging on to my arm. Then it flew back to its perch to dry out those delicate wings. I said my goodbyes and walked home, pretty sure I had a PoD. I did, although I hadn’t managed to get as close as I’d wanted. Maybe there will be other chances tomorrow.

We decided that, as it was a holiday weekend, we’d pass on the dance class tonight. We’re still not sure if the class went ahead without their star pupils, but I’m sure we’ll find out next week.

Spoke to JIC and found out about Vixen’s dentist’s visit to repair a damaged canine. A canine with a damaged canine? How strange. I wonder what she thought when she came out of the anaesthetic.

Sketch tonight was A Pack of Playing Cards. I chose UNO because it’s the only game Scamp can trounce me at. I must have won maybe one or two games in all the games we’ve played which must number about fifty now. I just don’t seem to be able to break that jinx! 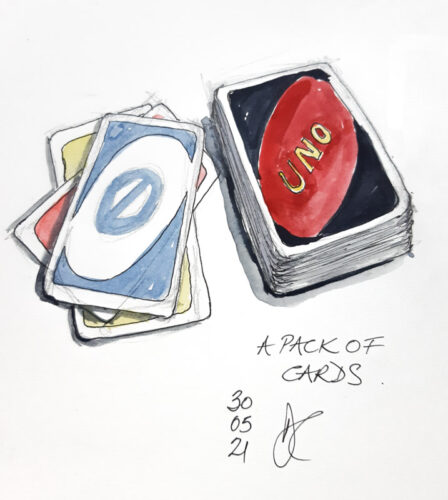 Tomorrow we’re hoping for similar glorious weather to today’s offering. We’ve seen the promises, but we’ve had promises before that didn’t live up to the hype. Maybe it will this time!