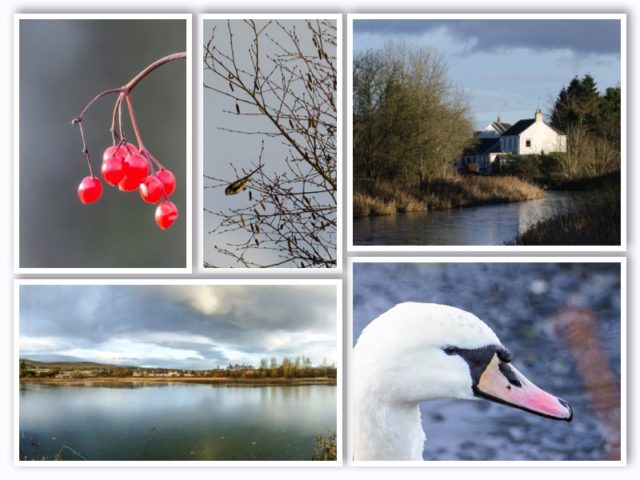 Scamp was on a mission today.

First she loaded up her car with the bottles for the bottle bank and junk for the skip and off she drove to the dump to get rid of the stuff. On the way home she drove to Tesco and loaded up with more stuff, mainly food this time. She told me that although it looked cold outside, it wasn’t all that bad. I took her at her word and drove to Auchinstarry to walk the canal. I had a bit more daylight today and the light was good, so I walked out to Dumbreck marshes. Along the way I met some swans on the ice in the canal.  The water under the trees and out of the sun was frozen right across the canal.  I also got a view back to the houses beside the water which I quite liked, but the swan got PoD. Walked over the plantation and on to Dumbreck. Walked through the marshes to the edge of the wildlife reserve. Out there I saw some long tailed tits doing a bit of acrobatics in one of the trees. That’s a picture of one doing a ‘cannonball’ above. As the sun went away, it got a bit colder so I made my way back to the car. On the way I stopped for a panorama of the pond between the two paths. The red berries are deadly poison.  That’s why the birds leave them alone.  I think that about covers all the photos.

Not a bad walk. Easily covered my 10,000 steps, but sat down with a cup of coffee and a roll and that wee bugger on my wrist wanted to ‘go for a stroll’. I’m afraid I said some bad words.

While I was out, Scamp had ‘done a bit of tidying up’. She only does this when I’m out, because I just hold her back. I know that. Then she did a bit of gardening. After my late lunch I helped(?) her with a bit of DTP in MS Publisher. Not the most sophisticated DTP program, but it covers the bases, or at least it did. I couldn’t believe the amount of things I’d forgotten how to do. It used to be so simple, three years ago! Between us we got it done, but I suspect she’ll go back to her old way of doing it in MS Word in future.

Jamie phoned tonight and entertained us with a tale of the visiting Finnish group at his work who were introduced to the Epicurean delights of fish suppers. I really wonder what they thought of eating out of a piece of paper! Still, it’s a delicacy, and it’s the fare of the country, so perhaps it was the right thing to do. When in Rome …  We had stir-fry tonight, eaten from a plate, with cutlery!

Tomorrow we’ll probably end up at beginners class for Salsa. It will give us some exercise, if nothing else. Other than that, no plans.