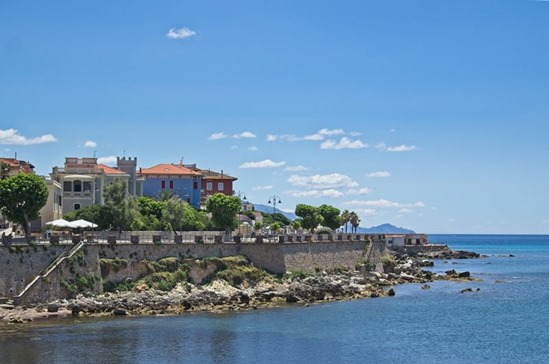 Today we were in Sardinia.  We’d been there before, but not to this port.  That meant we didn’t have to go looking for a pizza shop or an art shop we’d been to on previous years!

Spent the morning in the pool again and then decided it was time to go ashore.  Today we had to get a Tender ashore.  As usual with P&O, the organization of the disembarkation was really well done.  Issued with tickets and told to wait in one of the restaurants until our number was called.  It was only about twenty minutes of a wait before we were called, then it was all aboard the Skylark for the short trip to the harbour.

Alghero was a lovely little place.  One of those places you take an immediate liking to.  Old houses and a few Roman ruins.  Twisty, winding streets with lots of trees and little parks.  Nothing new or brash.  Not a lot of shops and the ones that were there were small jewellery shops or touristy ones.  No big stores, not even a supermarket.  Loads of cafes too.  We stopped and had lunch in one.  I had a pizza and Scamp demolished Spaghetti with Scampi (prawns) and Tomatoes.  Both were voted very good.  The only down side was the number of flies.  Earlier we saw a fountain that would scoot water up at random intervals in the street.  We stood for a while watching kids running round and through it, almost willing the water to start an soak them, but eventually they got fed up waiting and ran away … dry.  There were really large (3m long) posters on the walls of buildings showing old people around the town.  I was really impressed with the quality of them.  They seemed to be part of an exhibition.  We didn’t linger long after our lunch and soon got the tender back to the ship.

Dinner was at a table with a strange assortment of people.  A family where the father was really obnoxious and sarcastic to his wife who hardly spoke and a daughter who seemed quite ‘normal’ by comparison.  The other person at the table ‘Barbara’ was playing the ‘little old lady’ card.  She pretended that she was a little bit lost, but managed to wangle a full bottle of wine from the wine waiter by claiming she had handed over her wine card. (When you buy a bottle of wine and don’t drink it all, you can reserve the remainder for the next day and are given a card with a number on it.  That same number is written on to the bottle label.)  I’d seen her take out the card and then slide it into a side pocket of her purse.  After that she berated the wine waiter and told him she had definitely given him her card.  The daughter of the family of the family had seen the subterfuge too, but Barbara got a full bottle to replace her half empty one they couldn’t find without the matching number.  Must try that trick some time.

Not a lot going on after dinner, so a couple of drinks and then it was time for bed, and a sea day tomorrow.