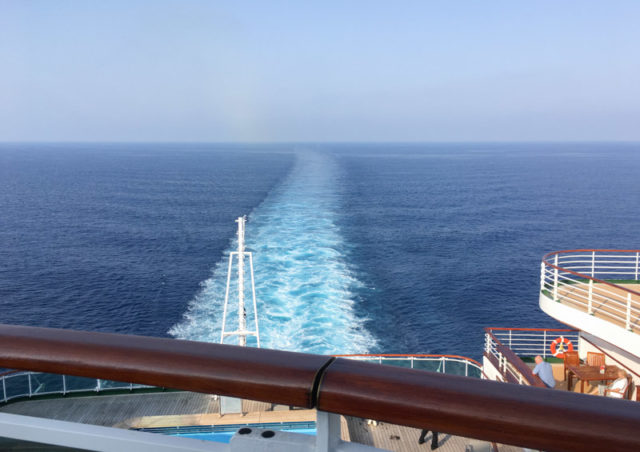 … I said could you please make that Crêpes.”
(Bob Dylan’s 115th Dream)

Painting class in the morning and today it was a pelican we were rendering on paper. It wouldn’t have been my first choice and in the end it looked a bit more like a distorted swan than the exotic fish eater. Still, as as I used to say, it’s done now. Scamp went dancing while I was struggling with a pelican and she was much more successful than me.

After that we went for a swim, walked round the ship and did a bit of dolphin spotting. However, there were other things in the sea, mostly junk. Bottles (maybe some with messages in), leaves, pieces of paper and a turtle. I thought it was a leaf at first, but then I realised that we were about ten decks up from the sea and there isn’t much to give a sense of scale. Then it moved its flippers and leaves don’t have flippers. It was a turtle. Too late I told Scamp and by that time it was a little brown smudge on the top of the water. We waited and waited and only saw one more. No photos I’m afraid, no time to get the camera focused on the little creatures and take the shot. Not when you’re travelling at 20 knots on an undulating sea. Still, we saw turtles. Also saw a pod of dolphins. No photos there either, but I did get a good shot of blue water where the dolphin had been.

Months ago we booked a meal at Epicurean, assuming that as it was the first week of the cruise, it would be menu ‘A’. It’s not as simple as that. Menus are rotated on a four or five day cycle and we got menu ‘B’ which to Scamp’s disappointment didn’t finish with a Crêpe Suzette. After what was an otherwise faultless meal we booked tonight’s dinner in the sure and certain knowledge that it would be menu ‘A’. It didn’t disappoint. We sat at the rail at the back of the ship watching the world drift by and looking out at where we’d been. Below us were the rear swimming pools and we could listen in to conversations of swimmers doing the same as us, but without the encumbrance of posh dress or heavyweight kilt, because tonight was a ‘Black & White’ dress code. National dress trumps ‘Black & White’, by the way. I’ll fill in the menu when I get a chance to check it, but what sticks in my mind were the ‘amuse bouche’, namely Bloody Mary Lollypops and Blackcurrant and White Chocolate Lollypop! Inventive.

That was about it for the day. Tomorrow it’s Gibraltar. Monkeys and cheap booze.