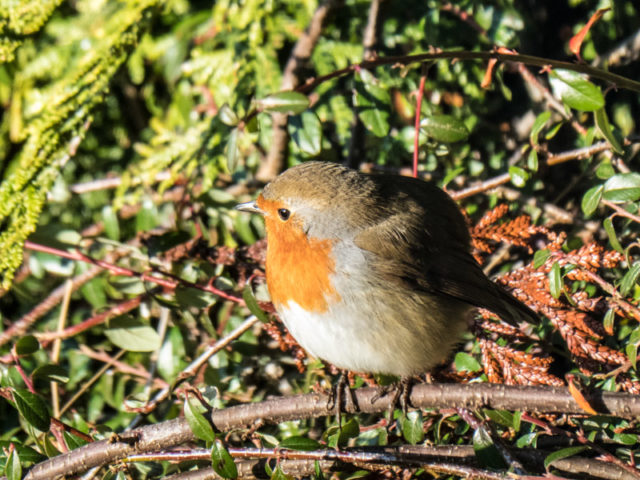 I was hardly past the door today although it was a bright, cold day. I did take some macro shots of the Cladonia forest that grows along the front fence at the house. I also grabbed shots of an iconic robin sitting on a branch, just outside the front window. It was one of those shots that got PoD.

Hazy phoned to say they’d be with us about 2pm and they arrived on time. In the interim we stuffed our faces with vol au vents and called that lunch. When the visitors arrived we shared out the presents. Vixen went crazy, not satisfied with opening her own presents, she wanted to open everybody’s. Then she found her present from Hazy and ND, a Kong. From then on nobody and nothing was more interesting than ripping the kong to pieces. Who would have thought that two tennis balls, one with a squeaker would command such attention. Crazy dog carefully buried it under her bed then dragged everything out to ‘find’ it again.

Dinner was roast chicken with stuffing and Spanish Rice which is rice with onions, peppers and bacon, all chopped up very fine. Delicious. It’s on our list to try soon. Pudding was, of course, Christmas Pudding or/and Apple Crumble laced with Brandy. Just about too much, but not quite.

After H&N left for the hotel, we settled down to watch TV and laugh even more at Vixen’s antics.

Tomorrow we need to go for a walk!