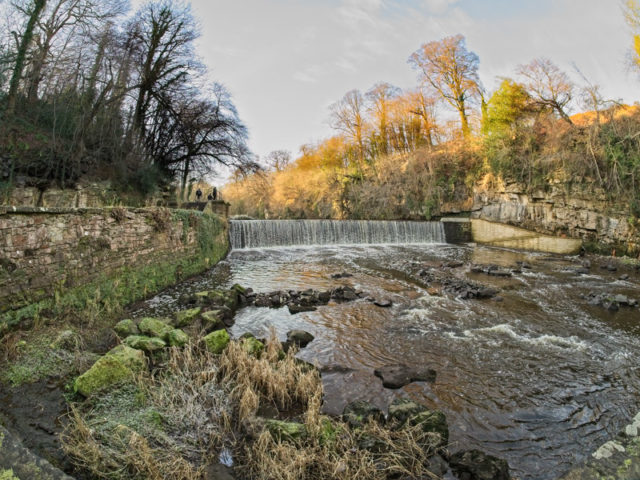 All the cars were frozen when we got up today, but we were determined to make the most of the beautiful day, so we got up and I went out to defrost the car. I’ve got a sort of love – hate relationship with the Juke. Somethings about it just irritate me. Some things I love. I’d like a car that has a heated front screen, but the Juke has the next best thing. Press the demise/defrost button and the blower starts going full blast and all of that blast is directed towards the windscreen and using the side jets, to the side windows. Wishing two or three minutes the screen and the side window are clear. It helped today that the sun was just creeping round to spread some heat on the top corner of the windscreen, but most of the work was done by that defrost button.

We drove east to Cramond, home to the giant toblerones and the nice wee cafe beside the River Almond. That was where we were headed, to the river walk. Unfortunately when we reached the cafe it was closed. It looked as if it had been closed for quite some time and there was an advert looking for kitchen staff. However, there were no kitchen staff in evidence, so we walked further up the river, past the ruins of the mill where today’s PoD came from and on until we reached the steps that lead up and over the cliffs and down the other side, then they go over another set of cliffs and down the other side of them. We decided that was too much of the up and over stuff, and postponed it until another (warmer) day.

Since it was now around midday, we were mindful of the fact that the sun would soon be dipping towards the horizon and also that a spot of lunch would be good. We knew of another cafe in the village and walked to that, but there was no room at this particular inn today. There was nothing for it but to grab a shot of the toblerones sparkling in the sunshine and looking good with the tide just starting to come in from a long way out, and go home.

Stopped at The Gyle shopping centre to go for lunch at Morrisons and to get some provisions too. Roll ’n’ Sausage for me, bowl of chips for Scamp and two coffees for just over six quid was a bargain. Then it was back in the Juke and home along the M8 for a change. And, for a change we made really good time on a road that’s almost always congested.

Spoke to Hazy for a while when we got home.  She had read yesterday’s blog to see what our plans were for today and time her call perfectly.  Good to catch up with all that’s going on “”, as Ray would say

Dinner was an old favourite, Mac & Cheese with extra bacon for me. Then it was time for Wednesday Salsa. I danced half of the 6.30 class and then the whole 7.30 class. Thoroughly enjoyed both. Coming home they were digging up the motorway or pretending to at least and we had to sit at every traffic light all the way from Charing Cross to Cumbernauld Road in Dennistoun. I didn’t count them, just harrumphed as the next one ahead turned from amber to red. Sometime’s you’re lucky and sometimes you’re not. Tonight was NOT!

Tomorrow it’s coffee with the boys. Adult entertainment. There may be strong language from the start as they say on the BBC.