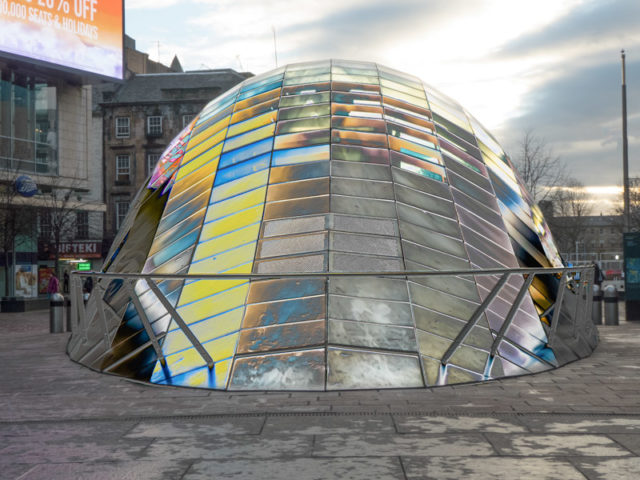 Went for coffee with the boys and then decided to wander round Glasgow.

Finished off Colin’s calendar and with the ink barely dry, set off for the town centre. For once we were all there and the chat was good for an hour and a half until Jeanette arrived to drag Val away to do the shopping. That seemed to signal a breakup in the group and we all went our merry way.

I’d half intended going in to Glasgow for a walk and a bit of window shopping and as the day was still fairly light and almost dry, that’s what I did. Parked deliberately on level 5 of the multi so I could walk straight in to the ‘toyshop’ level of JL. However, there weren’t many toys at a price I was willing to consider, far less spend, but that was ok, because I was only window shopping. I think it’s true what the pundits on the news have been saying, there’s so many cut price weekends and end of season sales now, the January Sales haven’t the bargains they used to have. They’re just a means to ditching the Xmas tat they were selling full price a month ago. The great thing about them is the silence. No longer do we have to be assailed by xmas musak. Wizzard and Cliff Richard have now been put back in their box along with the mistletoe and wine.

Down Bucky Street and along Argyle Street looking for a PoD. I eventually got it in the form of the back of the St Enoch’s subway entrance. I joked with a couple of students who were also photographing it that it looked as if there was a queue forming to take the best shot. They agreed that it was an interesting building, but not as good as the old sandstone entrance to the station that’s now a Nero. I had to disagree with them when they said the cafe spoiled it. At least the cafe had changed the building only very slightly. It could have been a lot worse. We agreed to differ and went our separate ways.

That was about the extent of my Glasgow walk. I did buy myself a pair of bluetooth headphones just because they were cheap and looked better than the other ones I’d bought last week. I was right, they were fine. Got two songs out of them before the battery died.

Finally found out how to retrieve the call list on the Juke. If you delete the phone from the Juke’s system, then plug it in using a USB cable, it installs it again and the call list reappears fully loaded with its previous numbers. Why you need to connect it with a cable when it’s a Bluetooth system, only Nissan knows. Also, it’s only the iPhone that needs this connection.

There was a slight patter of tiny rodent feet tonight and there had been the same on Tuesday night. Certainly not as much as before, but it will be reported to the “Rat Man”when he returns tomorrow.

Because we need to wait for the “Rat Man” tomorrow we have no other plans. If he comes early, which we suspect he will, we may go out to lunch.