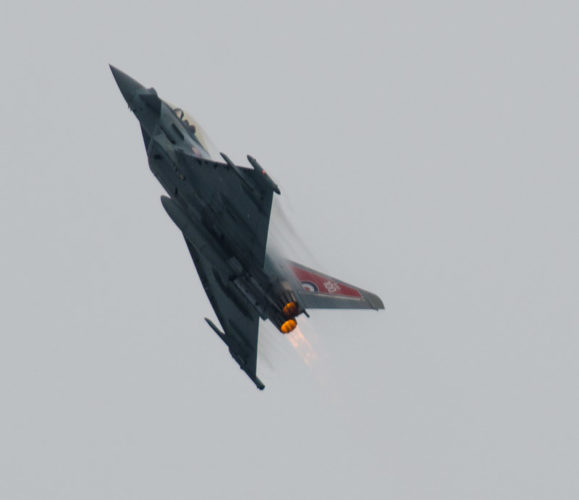 The airies (I do wish my spell checker wouldn’t change ‘airies’ to ‘fairies’) were taking part in the Scottish International Air Show.  At Ayr, just to confuse things even more.  The reason for our indecision was the weather.  It was raining at home, hopefully it wouldn’t be raining at the coast. Since the trains would be busy and there was a reduced service due to an unsafe building next to Ayr train station, we decided to take the bus. It would be full of ‘pensioners’ using their bus pass, but as we fit into that demographic too, we can’t complain. Bus journey was fine and for once the connection between the X3 and the X77 worked perfectly. Followed the crowd down to the beach where the air show was to be staged. It’s the first time I’ve been to this show, but my favourite venue of Leuchars is no longer an air base and we were on holiday and missed the other Scottish Air Show at East Fortune. Hopefully this would be a good replacement. The fact that it was free had nothing to do with our decision!

Arrived at the show area on the Low Green, just above the beach to find that it hadn’t started. I thought at first that they were waiting for us to arrive, but apparently they were waiting for the weather to improve and the cloud ceiling to lift. The rain that had followed us all the way from Cumbersheugh to Ayr had halted, but the clouds were still hanging low and visibility, although improving, wasn’t great. However it gave me time to grab a photo of Scamp and her favourite helicopter, the Chinook, or ‘Double Twirly’ to give it its proper name.
After about fifteen minutes or so of hanging about, the announcement was made that the Typhoon was taxiing at Prestwick. Now that would be a sight to see as you waited for your Ryanair flight, a Eurofighter Typhoon taking off!

Unfortunately the Typhoon didn’t get to show what its 1:1 power to weight ratio could do, because of the low cloud base, but it was noisy and it was fast and it made my PoD when the pilot switched on the afterburner! It was an absolute bugger to photograph, slipping in and out of focus all the time.

I won’t bore you with a list of all the planes that we saw performing, but the stand out ones for me were the DC3 and three Beech 18s formation, the Catalina and the superbly noisy and fast F18. Such a scary beast. Photos of these and others are on Flickr.

Watched the immaculate Red Arrows go through their routine with inch perfect precision. In formation all the planes’ wings were aligned perfectly and the pilots’ spatial awareness must be super accurate. They closed the show and then the rush started to get to cars, trains and buses. We just managed to get on the X77, and I mean JUST. There were eight seats left on the bus and we were four and five in the queue.

Bus back to Condorrat and a Special Fish Supper each to end a Special day. It wasn’t perfect. The Battle of Britain aircraft didn’t make it because of poor weather and there were lengthy gaps in the programme, but all in all it was enjoyable. Best of all it was free.

Tomorrow? Dancing in the afternoon, that’s all that’s planned.