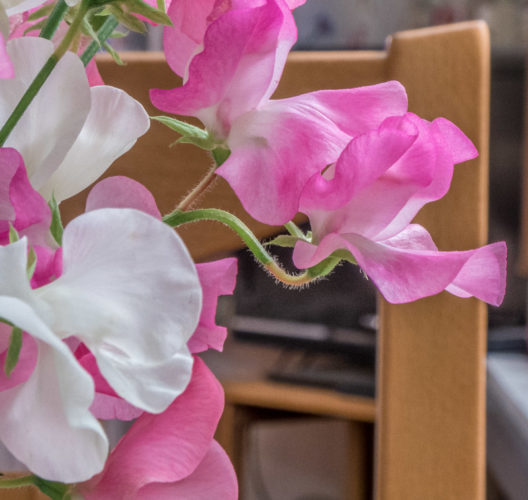 Auld Claes and Purrich. One of my dad’s sayings, meaning back to real life after a holiday. That sums up today perfectly.

It was dry and fairly bright when we set off to do some shopping. Decided to drive to Stirling to shop in Waitrose, partly for the run and partly for a walk round the shops.

Took a couple of shots of a sow thistle growing out of a wall near the car park in Stirling, but rushed it and it turned out overexposed so badly it was out with Lightroom’s capabilities to bring it back into gamut. That’s why it’s flooers again for PoD. This time they were carefully exposed and taken on a tripod. Remarkably detailed and low(ish) grain from the Teazer which which is proving a very adaptable camera. These are Scamp’s sweet peas which she has grown from seed this year and are flowering very nicely now and just over 2m tall. A much more successful batch than last year’s.

Dinner tonight was pea and prawn risotto, the peas came from the garden. Not sweet peas, but garden peas. Ones I grew this time. Last year I got one pea plant. This year I have about seven, grown from seed I got when we visited JIC and Sim earlier in the year. There weren’t that many peas in the risotto, but they tasted good.  Partly that was due to chopping up the pea pods and boiling them with the liquid for the risotto.  Hoping to have more peas with Sunday dinner. Also hoping to have new potatoes from our second batch which I’m going to lift today.

That’s about it for a dull day back in Scotland. No plans for tomorrow.