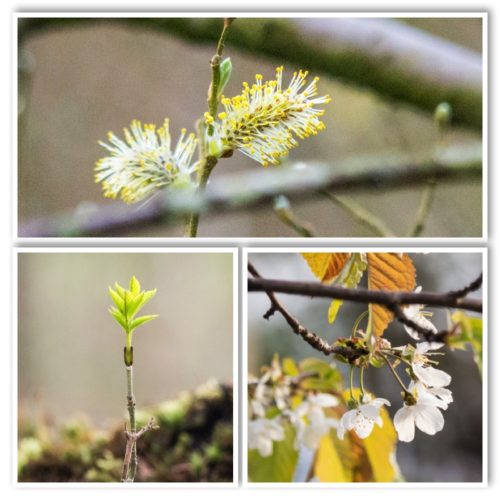 Got up early, just after 6.30 to go for a walk because it was too warm!  Too warm in Scotland in April?  Walked around St Mo’s and although I saw some deer, they were too far away, so it was flooers and blossom that provided the PoD.

Scamp out for coffee with Isobel in the morning, giving me time to frame up my mixed media painting.  Not sure now if it’s the right colour of mount, maybe it’s a bit too dark.  I also managed to get my packing done for the visit down south.
After Scamp returned, I went for coffee with Val.  Fred was indisposed with flu, so sent his apologies.  Val was on good form and we discussed computers and technology in general over a couple of cups of java.

Bought a pot of Marguerites for Scamp in B&Q and they fitted perfectly into the pot vacated by the Black Eyed Susans.

Then it was time to get organized properly and get the bus into Glasgow.  Then the airport bus to be told that the plane was delayed by 20min.  What do you expect from EasyJet?

Pleasant flight and was met by JIC at Stanstead.

Vixen didn’t seem too impressed with me, although Scamp was readily accepted.  Maybe she’ll be better tomorrow.

Going for a walk through the gardens of a stately home tomorrow, hopefully.