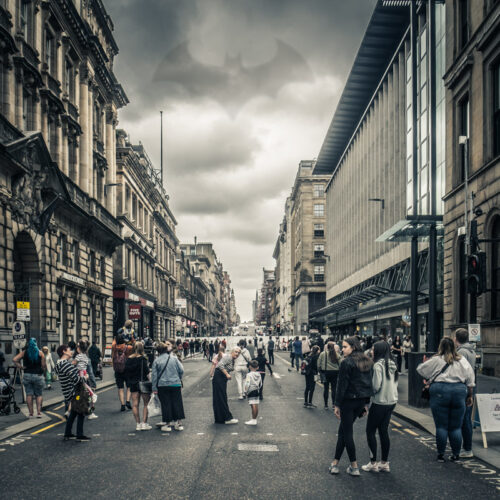 Glasgow was mobbed today. Was that because Batman was in town?

We drove in to Glasgow then I found a ‘black dog’. Things went downhill from there, and not just because we were walking down Bucky Street. Wandered in to Class Art and thought I’d walked into a time slip. All those nice cheap brushes they used to have had had their price tags updated to silly prices. It looked like they’d been increased by between 10 and 20 percent. Is this so they can bring them down by between 5 and 10 precent and call it a ‘Student Discount’ in September? Might be. I wasn’t buying today. I’ll go to Hobbycraft instead.

There were road closures all over the city centre. Presumably because the new Harrison Ford movie has just completed filming and the new Batman movie is presently filming. St Vincent Street was full of punters, all trying and vying to find an angle that would give them a glimpse of Batman himself or his Batbike. What an ugly beast of a thing, and the bike’s not much better. Two metre barriers were blocking everyone’s view of the action, but up the hill you could see red and blue flashers from, presumably, American police cars. If you really had telephoto vision you might just be able to see the Batbike at the front, but really it just looked like a dark grey dot on a lighter grey tarmac road. I took a few shots of the punters and with some jiggery pokery at home (after I’d lost the ‘black dog’) I got something I was happy enough to call a PoD.

We drove home under a cloud, both physical and otherwise. Both soon disappeared, but not before the physical cloud had dropped some rain on the garden. It didn’t last long, but hopefully it will do some good.

Out later to go to Crawford and Nancy’s for dinner and to meet Olly their new 9 month old Labrador. Possibly the most un-labrador looking dog I’ve ever seen. Long and lean and very clumsy, but great fun. It was a very good night. Lots to talk about with folk, like us, who love to talk. That’s what friends are for. Arrived home just after midnight, so this is a last minute completion of a blog I started around 5.30pm before we went out.

Tomorrow (today) we’re hoping to go to dance class and to refresh our memory of steps learned in Zoom class.