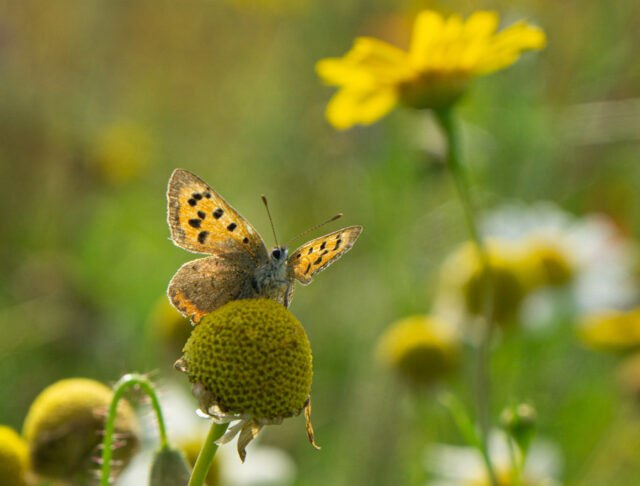 The weather seemed to be set fair so we drove out into it.

Pointed the Blue Micra in the general direction of Edinburgh and stopped driving at Cramond which was our destination for the day. The day started under a disappointing milky white sky, but as we travelled east the clouds lifted and thinned so that by the time we were parking at Cramond there was definite form to the clouds which were breaking to allow the sun through. We went for a walk.

We walked along the esplanade, again in the general direction of Edinburgh. There wasn’t much choice here, with the Forth estuary to the north, the way we’d come to the south and the River Almond cutting off our walk to the west. If we’d been there earlier we could have walked over the causeway to Cramond Island, but it looked as if the tide was on the turn, so that would have been a dangerous and wet direction to take. Maybe another day.

On the walk we found a community wildflower garden. It was carefully cordoned off and two ladies were carrying metre square grids to help them in taking serious measurements or counts of something scientific. We just liked the colour combinations of the red poppies, blue cornflower and something like a big daisy, but bright yellow. They almost made PoD, but as it happened they only played a supporting role. PoD went to a Small Copper butterfly on a fading cone flower.

I’d hoped we’d get a coffee in the wee café, but Scamp had remembered that it’s only open at weekends, so we walked on. We passed my favourite trees. I don’t know what they are. I must ask someone who knows, but they look so elegant. Tall straight trunks with little bunches of leaves at the top looking like a bad haircut. That’s when Scamp noticed someone hadn’t poop scooped and she’d walked through it. For once I played the good Samaritan and offered to take her shoe down to the sea and wash it clean. Of course, in the process I managed to confirm that the tide was indeed coming in. In to my trainers, that is! That was far enough we decided and walked back to the ice cream van that’s always parked at the roundabout that marks the west end of the esplanade. Two cones by the sea. What’s not to like?

We walked up the path beside the river as far as the falls at the old ruined mill. Again I’d been hoping that a wee cafe that used to be there would be open, but it was under reconstruction, so no coffee today. There’s a great old tree next to the path. It sits on a steep slope and over the years the rain washing down that slope has removed most of the soil from its roots and they are now exposed to the air and covered in colourful fungi. Unfortunately it now has a white “X” painted on its trunk, so it may not have much longer to be climbed on by decades of children.

Back home I made a sort of salmon and pea tagliatelle which was less than successful. Maybe it’s worth another try.

Tomorrow looks like another dry day. Scamp has a hair appointment in the morning, but the afternoon might be free.