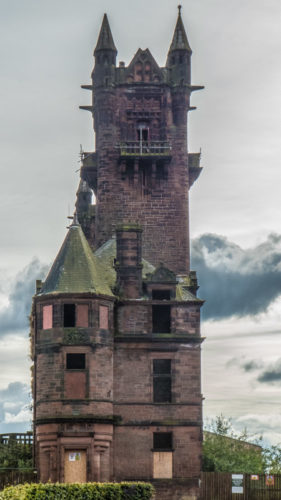 It’s Monday and that means two things. Gems and Salsa.

While Gems were going through their paces I used the time to get a painting idea out of my head. I had a couple of old canvases that I’d painted over and were unallocated at present, so I started into them using some acrylics and some heavy body gel to give a bit of impasto. I was quite pleased with the effect and may work into it a bit more to brighten some areas of the hills to give it a bit more form.

That done, I drove to the Fort to buy a book from Waterstones – “How to paint people quickly” by Hazel Soan. I’m aware that I haven’t posted an ink sketch this week, but the matter is in hand.

On the way back from Glasgow, I stopped at Gartloch, where the ruin of the old mental hospital stands in the middle of an exclusive housing development. I took a few photos, but didn’t linger long. It felt like I shouldn’t be there. I can’t imagine what it must have been like being incarcerated in this victorian monstrosity. I’d heard it described as being like the set of a horror film, but it’s not until you see it, you fully appreciate what that means. I can’t understand why anyone in their right mind (no pun intended) would pay to live next to this scary big group of buildings, because this isn’t just one pile of sandstone, this is a whole group of them. No glass in the windows. Most of them and all the doors boarded up. I didn’t linger long, but I’d always told myself I’d visit it one day. It’s done now.

On a brighter note, Salsa tonight was great fun. Advanced class did Guanabo, Disco, Balsero Dos and ’The New One’.

Tomorrow we go to ‘recce’ the venue for a birthday party on Friday for John Carrigan.