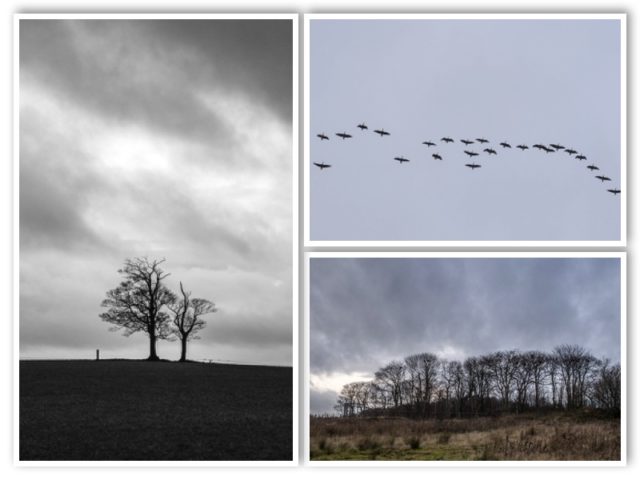 It was a decent temperature today, mild at 10ºc for December, so I thought I’d take my bike out for a winter run.

I’d some housekeeping to do first as Scamp’s sister was coming to stay for a few days and the ‘painting room’ was more like a pigsty.  It took longer than I’d intended to get the room looking nearly ship-shape.  This was partly due to me getting sidetracked into adding details to my most recent painting, but after an hour or so it was reasonable.

After lunch which was last night’s curry reheated, I got the bike out and pumped up the tyres a bit and I was good to go.  Cycled my short course which is only about 6 miles, but included a lot of climbs and descents, as well as a fair bit of off-road rutted tracks.  A good run for a re-start to my cycling.  It felt a bit cooler than the recorded 10º, but that might have been the wind chill and it might have been because I’ve not cycled since the end of the summer.  There were lots of geese flying south today.  That may be a sign of the weather getting more wintry in the next week or so.  One skein of geese flew directly overhead and the noise they made was deafening.  I’m guessing they were discussing the best place to roost for the night.  Night was indeed coming on fast, so I took their advice and headed for my roost for the night.

Salsa Ball tonight, so it will be a late start tomorrow, but Scamp has a party planned for ‘Gems’, so we won’t want to leave it too late.