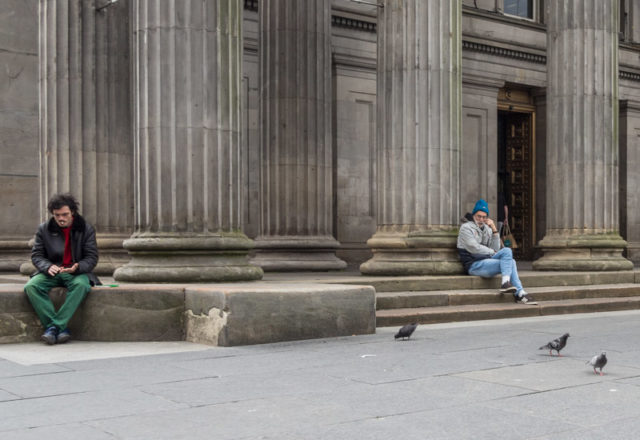 Today we were dancing again without the torture, almost.

For once we didn’t get picked up on every single wrong footed mistake. That’s only because Michael exited after the Jive session, leaving Anne-Marie to teach the Waltz and Quickstep session. It was much more interesting without the Chief Torturer’s nit picking. I can’t say it was any more perfect than our norm, but it was far less stressful than last week.

I got today’s PoD in Glasgow, walking back from Nero where we had our post practise debrief. It is, of course, outside the GOMA. To paraphrase Findlay Napiers “Down there at the GOMA where all the weirdos go …” All human life is there and a few that will never be human.

I’d already had a walk in St Mo’s earlier today, but despite the blue sky and some sunshine, I didn’t get anything interesting.

Scamp drove us in to Salsa tonight, but I think I had been trying too hard to keep my back straight and my head up in Blackfriars during the afternoon and as a result I had to give up halfway through the 7.30 class because my back was aching. Sat in the car and guzzled a couple of paracetamol which took away most of the pain.

Tomorrow we have no plans, other than waiting in for my batteries to arrive.