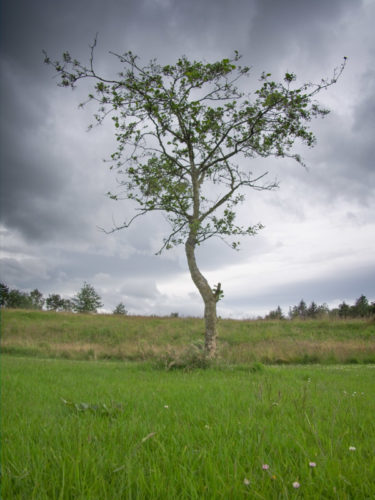 Today was dull. No sunshine. A very short sprinkle of rain. Nothing for it but to get the needles and pins out.

After breakfast I took the scissors and cut out the front of the waistcoat complete with all those strange wee triangles that stick out of cut out patterns. After consulting with Scamp and also after watching a few YouTube videos I was prepared to mark the darts with needle and thread. I’d also seen a video that recommended using a chinagraph pencil to mark out the lines. What it failed to mention was that when you iron the darts flat, the heat melts the marks made by the chinagraph pencil and they disappear. Numpty. I forgot the three rules of watching YouTube videos:

Luckily the iron wasn’t quite hot enough and I could see the marks faintly glowing on the dark material. Then I used tailor’s chalk to complete the marking.
Later in the morning, I fired up the sewing machine and after a bit of jiggery pokery with Thread Tension, Stitch Width and Sweary Words, I’d stitched the darts to my satisfaction. Later I made a Welt (No, I don’t know what it is either). Exhausted, that’s where I left it today.

The DPD man came to deliver my new batteries for the new toy. Hopefully they’ll be more successful than the other lot and I set them to charge while I took the old Oly 5 for a walk around the pond. Not many beasties about, but I did get a moody shot of an old apple tree growing all by itself in the park. After a bit of work in ON1, that became PoD.

Dinner tonight was a delicious piece of smoked haddock with chips. Watched the tennis, well it was on everywhere by the look of things, and eventually managed to get the TV to respond to the Red Button to allow us to watch Andy Murray and his partner win their doubles match. Doubles is so much more interesting than singles. No long tedious grunt punctuated rallies. Much faster and good fun wondering what they were whispering to each other between shots of banging the ball over the net. Probably just deciding who’s round it is in the bar after the game.

Hoping against hope for a nice sunny day tomorrow to brighten up the end of the week and for a chance to take the OM D E-M1 (Now renamed Oly 1) out for a few shots of somewhere nice.